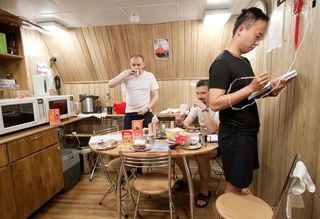 When itcomes to flying in space, the makeup of an astronaut crew can be just asimportant as the mission itself, and the same goes for a team of six volunteersgoing through the motions of a 520-day trek to Mars without ever leaving Earth.

Themock-Mars flight volunteers have already spent three months isolated inside a Russiansimulator that mimics every phase of a trip to the Red Planet, but have a longways to go before reaching even the midpoint of their Mars500 mission.

Inaddition to examining the psychological effects of long-duration spaceflight, researchers are hopingthat the experiment will shed some light on significant factors to consider increw selection for lengthy future space missions.

"Weare searching for psychological predictors that may say something about theinterpersonal compatibility of the crew so that in the future, we may be ableto decide about some criteria to use for crew composition," Gro Sandal, aprincipal investigator for the 520-day Mars500 simulation and a professor ofpsychology at the University of Bergen in Norway, told SPACE.com.

Future explorers of Mars or an asteroid need to be able to withstand the extendedperiods of boredom and monotony that would accompany long spaceflight, but alsoneed to be able to tolerate the pressure and stress of the mission itself.Equally important is to consider social personality traits, since the crewwould be living and working in close quarters for extensive amounts of time.

"It'simportant to select people for their ability to handle the tasks that areneeded to be an astronaut, but also their ability to interact with others in agroup," said Nick Kanas, a professor of psychiatry at the University ofCalifornia, San Francisco. "You need to be able to get along with people,but at the same time, be comfortable working in isolation if needed. There hasto be some flexibility in your personality."

Additionally,as space agencies from different countries are increasingly working together,crews have also become more heterogeneous and multinational. As a result,cultural differences between crew members could also complicate group cohesion.The heterogeneous makeup of the Mars500 crew, and the partnership of the spaceagencies involved, could provide some useful analogs in this area of research.

"Interpersonaltension will occur in any confined setting in which you have to stay for a longtime ? that's a normal reaction," Sandal said. "We do think thatinterpersonal tension and misunderstanding increases with crew heterogeneitybecause people from different cultures may have values that may be different oreven incompatible."

Kanasbelieves that these cultural tensions can be counteracted through education andopen dialogue among an astronaut crew, and between the astronauts and missioncontrollers on the ground.

"Trainingand team-building will be very important," Kanas said. "Groupfeelings need to be monitored, and people need to talk openly about theirfeelings so that they can stop stresses from festering and becomingproblems."

Yet,the true effect of cultural differences can often be difficult to measure, saidSandal, as the influence of culture on an individual's personality is notalways clearly defined.

"Thereare a number of differences that might be related to culture which arepotential sources of tension during isolation," she said. "But, atthe same time, it may be difficult to isolate the effect of culture in smallgroups from individual differences. Even if we believe something may be anexpression of culture, it's not always easy to make such conclusions."

Similarly,while experiments like Mars500 try to accurately mimic aspects of real spaceflight, the results can sometimes have limited applications,since participants cannot be forcibly confined if they decide to quit.

"Incontrast to real flights, people may feel that they have more psychologicalcontrol, since we cannot keep them in the chambers if they want to getout," Sandal explained. "But at the same time, we also know that crewmembers have invested a lot of pride, interest and effort into these endeavors.So, I think that it's not an easy choice for them to quit an experiment."

Still,the unprecedented Mars500 mission could provide researchers with valuable dataon the psychological factors that may potentially affect astronauts who one dayexplore Mars and beyond. The elaborate experiment could also direct attentionto the importance of adequate psychological preparation prior to and followingsuch missions.

"Psychologicalsupport and follow-up needs to be done for a long time after thesemissions," Sandal said. "It's extremely important for re-adaptationto normal life, and it illustrates that the responsibility of these agenciesdoes not simply stop after the mission ends."

Thiswill be especially true following the inaugural long-duration spaceflight,which could, in fact, be a mission to Mars.?

"It'simportant to have support on how to handle re-entry, just as it's important tohave support during the mission," Kanas said. "The first mission ofanything is going to be tough. Just like the first lunar missions, if you're onthe first Mars or asteroid mission, coming back, your life is going to becompletely turned around."