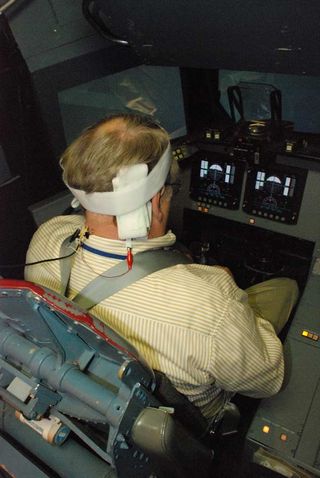 A three-time space shuttle commander uses the Galvanic vestibular stimulation (GVS) system during a space shuttle landing simulation. The GVS delivers small amounts of electricity to the vestibular nerve, which then sends the signals to the brain, resulting in sensorimotor disturbances that are similar to those experienced by astronauts when returning to Earth.
(Image: © Human Aerospace Laboratory at the Mount Sinai School of Medicine)

Anew contraption that artificially induces the dizzying effects of spaceflightin human brains without the pesky need to actually leave Earth is gainingground as a tool to train new pilots and astronauts. ?

Thesystem was created by a research group led by Steven Moore, an associateprofessor of neurology at Mount Sinai School of Medicine in New York.

Calledthe galvanic vestibular stimulation (GVS) system, the tool induces the sensory and mobility disturbances that are typically felt by astronauts when theyre-adapt to Earth's gravity following a space mission. It can make people dizzyand feel clumsy with impaired motor control.

"Youcan train for spaceflight tasks under normal conditions on Earth, but that will notgive you an indication of what an astronaut will feel like," said Moore, amember of the Sensorimotor Adaptation Team at the National Science BiomedicalResearch Institute, a nonprofit science institute located in Houston. "TheGVS system will make mission simulations more realistic. This will be quiteuseful for astronaut training, especially for astronauts that have not flownbefore."

Spaceflightside effects include sensory and mobility disturbances that can affect visionand neurological function, impacting an astronaut's ability to land aspacecraft during the return to Earth (and its gravity).
And once on the ground, astronauts often have trouble maintaining theirbalance, and performing basic physical functions, such as walking.?

TheGVS system uses electrodes behind the ear to deliver small electric shocks tothe vestibular nerve. These signals are sent to the brain ? essentiallytricking it into experiencing the side effects from spaceflight such asdizziness or clumsy motor functions.

Eachsubject flew 16 simulated shuttle landings, with the pilots experiencing theGVS analog during eight of the simulations. The results of the study werecompared with data collected from more than 100 real shuttle landings.

Ofthe real shuttle landings, one out of every five has been outside what isconsidered the optimal performance range, in terms of touchdown speed and sinkrate, Moore said. Pilots using the system landed at slightly faster speeds thanthose without, similar to the shuttle pilots in the real landings, heexplained.

"WithoutGVS, they were right on the target ? around 204 knots," Moore said."With GVS, the average speed was pushed up to about 210 knots, which is atthe upper limit of the target range."

Thetest subjects also experienced GVS-induced problems during a routine landingapproach braking maneuver, in which the pilots were required to make bigchanges in the shuttle's glide angle.

Duringreal shuttle landings, this is the point during approach at which pilotstypically experience sensory and motor control issues and increasedgravitational forces due to acceleration.

"TheGVS stimulation of the nerves is making the simulator pilots think thespacecraft is moving around," Moore said. "We are happy with thatresult. GVS induced similar decrements in simulator landings to those duringactual shuttle landings."

So,even though the research used shuttle landings as the test bed, Moore said theGVS is a viable analog for other space vehicles and operations as well, such aslanding on Mars.

Over90 percent of those tested had a high tolerance, and the results showed thatGVS stimulation impairs cognitive abilities related to spatial processing.Future research will study whether people have the ability to adapt to the useof GVS over multiple sessions.

Andwhile the GVS system could be a useful tool for training astronauts, it couldalso be used to train aircraft pilots and to prepare people with vestibulardisorders for the effects following surgery.