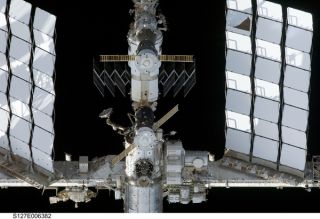 As more countries expand their spacefaring activities, and as budgets for doing so remain constrained, strong international cooperation and collaboration is imperative, according to space agency leaders from around the globe.

"Here at home, we cooperate closely with not only other U.S. government agencies, but across the globe," said NASA Deputy Administrator Lori Garver. "Let there be no confusion, international collaboration is critical to America and NASA."

Garver pointed to the International Space Station as the most visible example of international cooperation. The $100 billion orbiting outpost was built by 15 different countries, and is currently home to six crewmembers from the U.S., Russia and the Netherlands.

The space station is "the brightest example of long and fruitful cooperation by space agencies," said Dumitru Prunariu of the Romanian space agency, who moderated the panel discussion. [Photos: Building the International Space Station]

It is also an example of how other big space projects can be achieved by partner nations in the future.

"There have been remarkable changes in the international space landscape in the last decade," said Chummer Farina, vice president of the Canadian Space Agency. "These changes have been both amongst traditional players, and in the growth of the number of new players. Some 54 countries have been involved, in some way or another, in the International Space Station. We will need to continue to work to ensure that as we go forward, we remain open and flexible so that we can acknowledge national needs while ensuring cooperative global efforts."

Collaboration could be an increasingly attractive option for governments that are facing tighter budgets for large space missions, he added.

"In this context, I would suggest that we need to work together to demonstrate that the returns to the investments made by our countries in international space projects generate far greater returns than can be achieved through investments made solely in domestic projects," Farina said.

But the space station and human spaceflight are not the only regions that have proven to be successful arenas for international cooperation.

A long list of science missions have been achieved through partnerships between multiple nations, such as the $400 million Aquarius/SAC-D satellite, which is currently in orbit studying ocean salinity. The mission is a partnership between the U.S. and Argentina's space agency, with Brazil, Canada, France and Italy also participating.

The long-term sustainability of peaceful activities in space requires cooperation and collaboration across nations and fields, said Johann-Dietrich Worner, chairman of the executive board of the German Aerospace Center.

The space agency leaders represented at the panel expressed their commitment to international cooperation, and to finding new ways to join forces in the future.

"We're all in this together, and we will all benefit from these activities," said Keith Mason, a senior advisor at the UK Space Agency.

And it's not just the space agencies and individual nations who will enjoy the rewards of a robust global space community, they said.

"Space activities promise to deliver the most meaningful positive advancements of any other field," Garver said. "Together, we will deliver a space program that not only advances the human condition, but also the human spirit."