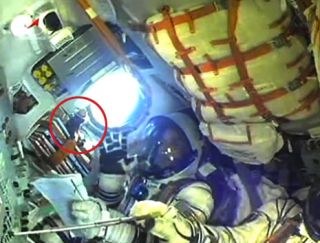 Circled in red, the Smokey Bear talisman and "zero-g indicator" is seen near NASA astronaut Joe Acaba on board Soyuz TMA-04M. Acaba, with Smokey, launched with cosmonauts Gennady Padalka and Sergei Revin to the International Space Station on May 14.
(Image: © NASA TV/collectSPACE.com)

When a former American school teacher, a veteran Russian space station commander, and a rookie Russian cosmonaut launched toward the International Space Station Monday, their fiery blastoff was not without a touch of irony: The trio rode a pillar of flame into orbit while carrying a toy mascot known for promoting fire safety.

NASA astronaut Joe Acaba and cosmonauts Gennady Padalka and Sergei Revin launched with Smokey (the) Bear, a toy of the mascot used by the U.S. Forest Service to promote awareness of the dangers of human-started fires. The astronaut and cosmonauts lifted off atop a Russian Soyuz TMA-04M at 11:01 p.m. EDT (0301 GMT/9:01 a.m. local time on May 15) from the Baikonur Cosmodrome in Kazakhstan. The launch began the crew's four-month stay in space.

Flying — and floating — above the crewmates' heads was the small Smokey toy, continuing a Russian custom for the crew to select a talisman and "zero-g indicator" to hang from the spacecraft's control panel. The toy began to float once they reached orbit, providing a visual clue that they were weightless and safely in space.

Traditionally, the Soyuz's Russian commander provides the doll, often chosen by a child, but for this flight, the honor was turned over to the American aboard. [Photos: Soyuz Rocket's Spectacular Launch]

"Gennady's been very gracious and offered us new fliers the opportunity to fly the talisman," Acaba said. A veteran of a 2009 space shuttle mission to the space station, this was Acaba's first launch on a Russian rocket and his first time serving as a station flight engineer.

Acaba's choice of mascot — Smokey Bear — drew questions in Russia but was very recognizable back in the United States.

The small brown bear doll with Smokey's iconic campaign hat and blue jeans was presented to Acaba by a friend.

"It was a gift that was given to me by a friend of mine who works for the U.S. Forest Service," Acaba said during a pre-flight press conference. An avid outdoorsman, Acaba holds degrees in geology and served as an environmental education awareness promoter while in the Peace Corps.

"Smokey is a very famous icon in the United States," he said in a reply to a Russian journalist, who asked about the meaning behind Smokey. "He's been around since the 1940s and tries to remind us about what the problems are when you have human-caused fires and tries to remind us to protect the environment as well as we can." [Photos: Wildfires Seen From Space]

Smokey is the center of the longest running public service campaign in U.S. history, according to a spokesperson for the Ad Council, which created the character in 1944 for the U.S. Forest Service.

Smokey is perhaps best known for his catchphrase, "Only you can prevent wildfires."

"Smokey's message is as relevant today as it was in 1944 and we're continuing to work with the U.S. Forest Service to identify innovative and engaging ways to help all Americans understand their role in wildfire prevention," the Ad Council's vice president for public relations and social media Ellyn Fisher told collectSPACE.com. "A partnership with NASA to get Smokey to outer space would continue to elevate the conversation and we would be thrilled."

According to Fisher, this is the first time Smokey the Bear has flown in space, although a patch featuring the mascot was lofted with a weather balloon payload to 100,000 feet (30,480 meters) in May 2011.

Although Smokey Bear is an American character, Acaba's Russian commander agreed with the selection.

"I supported Joe in this decision," Padalka said.

Presents and counted for

According to Fisher, Smokey will celebrate his birthday in space. The Forest Service mascot will turn 68 on Aug. 9.

The bear is not the only crew member though, celebrating his birthday while in orbit.

A month later, the Expedition 31 crew will celebrate double birthdays. Both Padalka and commander Oleg Kononenko were born on June 21, in 1958 and 1964 respectively.

Revin, as the only TMA-04M crew member whose birthday preceded their launch (it was in January), packed presents for his colleagues.

"it was my duty to bring some birthday gifts for them," he said. "I hope to make a pleasant surprise. I hope they will find these presents useful during their flight. I also hope these presents of mine will lift their spirits a bit."

"You'll find out what kind of birthday gifts I am carrying via [Mission Control] MCC-Moscow — they'll report about that — when the dates come," Revin added.

As for himself, Revin chose to bring a small but symbolic stuffed doll.

"I know my comrades take small souvenirs with them and I'm taking a small kangaroo," the first time flier said. "We all know that kangaroos hop, they jump, they leap forward, [and] so this is kind of a leap forward for me."