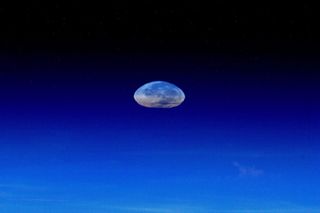 The Supermoon appears to be sinking into the atmosphere. The image was taken by André Kuipers from aboard the ISS on May 5, 2012.
(Image: © ESA/NASA)

Skywatchers on Earth weren't the only ones dazzled by the so-called weekend "supermoon" on Saturday. An astronaut in space also snapped spectacular photos of the full moon of May, including views of a squashed moon sinking behind the Earth's horizon.

Dutch astronaut André Kuipers photographed the supermoon of 2012 from a window on the International Space Station, where he has been living since December. He took the photos on Saturday, May 5, when the moon was in its full phase while at its perigee — the closest point to Earth in its orbit. Astronomers call the phenomenon a "perigee moon," though it is also known informally as a "supermoon."

One of Kuipers' supermoon photos captures the stunning moment when the moon dips toward Earth's horizon and is distorted by the planet's upper atmosphere, giving it an odd, squashed look.

A later snapshot reveals the moon as little more than a squashed dome as it slips behind the Earth as viewed from the space station. "Flattened moonbeams," Kuipers wrote in a photo description. [More Supermoon Photos of 2012]

Other photos by Kuipers show May's bright full moon shining over a blue Earth or, in another view, framed against the stark blackness of space. The astronauts even captured a video of the supermoon from space.

"The blue colors of our atmosphere are a beautiful contrast with the supermoon," Kuipers wrote.

Saturday's supermoon occurred when the moon hit its perigee point for May — which is the closest lunar perigee of 2012 — at 11:34 p.m. EDT (0334 Sunday GMT), and then hit the peak of its full phase one minute later.

Kuipers is one of three astronauts currently living on the International Space Station, and has been a prolific space shutterbug during his mission. NASA astronaut Don Pettit — who is also snapping stunning photos of Earth from space — and Russian cosmonaut Oleg Kononenko round out the crew. Kononenko is commanding the trio's Expedition 31 mission.