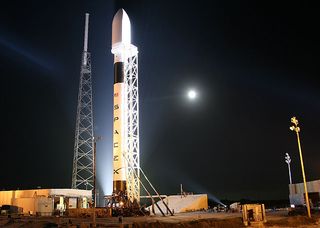 The proposed launch site would be used “to launch orbital and suborbital launch vehicles from a private site in Cameron County in southern Texas,” according to the FAA’s notice of its intent to prepare an environmental impact statement. All launches from the proposed spaceport would fly east over the Gulf of Mexico, the document said.

The proposed Texas facility would be built to handle up to 12 commercial launches a year and would support SpaceX’s Falcon 9 medium rocket and the company’s planned Falcon Heavy launcher for which SpaceX has no paying customers. Falcon 9 launches from the proposed facility would include launches of the Dragon space capsule, which SpaceX plans to begin launching this year from Cape Canaveral Air Force Station, Fla., to fly cargo to the international space station under a $1.6 billion contract with NASA.

The FAA document is to be printed in the federal register on April 10, according to a prepublication copy posted on federalregister.gov.

“SpaceX is considering multiple potential locations around the country for a new commercial launch pad,” SpaceX spokeswoman Kirstin Grantham told Space News April 9. “The Brownsville area is one of the possibilities, but there is a long way to go before this could happen.” [Gallery: Dragon, SpaceX's Private Spaceship]

FAA spokesman Hank Price did not immediately reply to a request for comment.

In November, SpaceX Chief Executive Elon Musk, said the Hawthorne, Calif.-based company wants to build a launch site that functioned “like a commercial Cape Canaveral.” SpaceX said then that the company was considering sites in Alaska, California, Florida, Texas and Virginia.

Grantham would not say whether SpaceX had ruled out any of these locations as possible launch sites, nor whether the company had zeroed in on Texas as the site of its proposed commercial launch facility. Currently, SpaceX has launch infrastructure at Cape Canaveral and Vandenberg Air Force Base, Calif. When it was still marketing the single-engine Falcon 1, SpaceX launched that rocket from Omelek Island in the Kwajalein Atoll. The company also has a rocket test facility in McGregor, Texas, which is about 690 kilometers north of the proposed Brownsville launch site.

If SpaceX does decide to launch from the Brownsville area, the company would have to build a new vertical launch facility, a control area and a payload integration facility, according to the FAA document.

“The proposed vertical launch area site is currently undeveloped and is located directly adjacent to the eastern terminus of Texas State Highway 4 (Boca Chica Boulevard) and approximately 3 miles [5 km] north of the Mexican border on the Gulf Coast,” the FAA document says. “It is located approximately 5 miles [8 km] south of Port Isabel and South Padre Island.”

All spaceport facilities would be on private land owned or leased by SpaceX, although some support facilities could be located off of SpaceX property, the document said.

Besides orbital spacecraft, the Texas site would also support “a variety of smaller reusable suborbital launch vehicles,” the document said. That could include SpaceX’s Grasshopper vehicle, a test bed for reusable rocket stages comprising a Falcon 9 core stage fitted with landing gear.