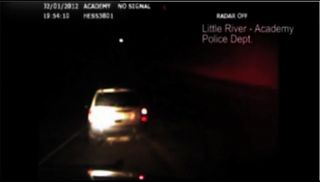 This fireball flying over Texas was captured by a Police car video camera on Feb. 1, 2012.
(Image: © Little River-Academy Police Department)

A bright fireball streaked across the nighttime sky over eastern Texas and Oklahoma last week, and was caught on video by a police car camera.

A number of witnesses spotted the show.

"At approximately 756 p.m. CST, over Abilene, Texas, I saw an object falling from the sky much brighter and long-lasting than anything I've seen," observer Daryn Morran told Spaceweather.com. "[The fireball] lasted close to 8 [seconds] before completely burning out. At first, it was bright white, and then started slowing down and getting brighter. Then it exploded like a firecracker artillery shell into several pieces, flickered a few more times and then slowly burned out ... awesome!!!"

National Weather Service meteorologist Joe Harris, based in Fort Worth, Texas, shared with Spaceweather.com the account of another eyewitness, who reported a "double boom heard at 8:00:30 CST. [The object appeared to be] 1/2 the size of the waxing moon, and broke into two major chucks with many smaller pieces. It had a 'white plasma' (sun-colored) look with a long golden tail."

Fireballs like this are not uncommon, though they can provide a startling sight. Falling rocket debris sparked another fireball on Christmas Eve last year over Europe, while a meteor lit up the Alabama sky in October 2011, and skywatchers in the Southwestern United States were treated to a show in September.

According to the American Meteor Society, several thousand meteors of fireball magnitude travel through Earth's atmosphere every day, but many are undetected because they occur over oceans or desolate regions of the planet. Others are less visible because they happen during daylight hours. [Fallen Stars: Photos of Famous Meteorites]

The term "fireball" is given to especially bright meteors that fly through Earth's atmosphere, but when these objects are observed in space, they are called meteoroids. Only those that enter the atmosphere to create glowing streaks across the sky are labeled meteors, and any fragments that reach ground are called meteorites.