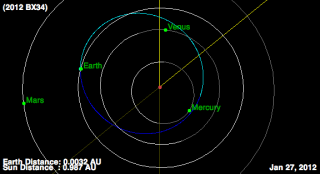 A small asteroid the size of a city bus zoomed between Earth and the moon's orbit Friday (Jan. 27) just days after its discovery, but it never posed a threat to our planet, NASA says.

"Asteroid 2012 BX34 is small," astronomers with NASA's Asteroid Watch at the Jet Propulsion Laboratory in Pasadena, Calif., said in a Twitter message. "It wouldn't get through our atmosphere intact even if it dared to try."

"Asteroids this small are hard to spot, & luckily they pose the least concern," Asteroid Watch scientists explained. "Our goal is to find the bigger ones." [Video and image of asteroid 2012 BX34's orbit]

In September, NASA announced that it has spotted about 90 percent of the largest asteroids (the size of a mountain or bigger) that can come near Earth. About 911 such giant space rocks have been confirmed. Astronomers estimate there are about 981 big near-Earth objects that occasionally creep close to our planet.

Asteroid 2012 BX34 was the second space rock to fly relatively close by Earth this week, Asteroid Watch scientists said. On Jan. 23, another small asteroid — called 2012 BS1 — passed by the planet at a range of about 745,000 miles (1.2 million km), which is about 3.1 times the Earth-moon distance.

"Asteroid 2012 BS1 is so small (about 7 meters) it would disintegrate in our atmosphere if it were to come close to Earth," the Asteroid Watch team wrote.

Astronomers with NASA and other science teams routinely scan the skies in search of near-Earth asteroids that could pose a danger to the planet. Experts estimate that asteroids about 460 feet (140 m) across and bigger can cause widespread devastation near their impact sites, though a larger space rock would be required to cause destruction on a global scale.

This week, scientists from around the world are also discussing how Earth should respond to the threat of an asteroid impact. The so-called NEOShield project is a European commission led by the German Aerospace Center and includes scientists from universities and industrial partners in Germany, France, the United Kingdom, Spain, the United States and Russia.

This story was updated to reflect the correct date of the Jan. 27 asteroid flyby.