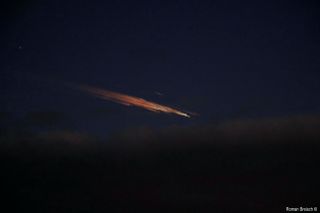 Astrophotographer Roman Breisch snapped this photo of a fireball created by a re-entering Russian rocket stage over Germany on Dec. 24, 2011. The rocket debris was part of a Soyuz rocket that successfully launched a new crew to the International Space Station on Dec. 21.
(Image: © Roman Breisch)

A dazzling fireball that lit up the night sky above Europe in a bright Christmas Eve display was no meteor or comet. A falling piece of a Russian rocket created the light show to cap the end of its successful mission, scientists say.

The fireball was spotted over several European countries on the evening of Dec. 24. By Christmas Day, astronomers at the Belgium Royal Observatory pinned down the source of the night-sky fireworks.

"The fireball observed above Belgium, the Netherlands, France and Germany on December 24 around 17h30, was the re-entry of the third stage of the Soyuz rocket that transported the Dutch astronaut Andre Kuipers to the [International Space Station]," observatory officials said in a written update.

The rocket's spent upper stage then fell back to Earth in a fiery re-entry through the atmosphere. But despite the man-made nature of the fireball, it still amazed skywatchers who happened to look up as the rocket debris fell to Earth. [See the Christmas Eve fireball photo]

The Soyuz rocket launched a Russian space capsule carrying Kuipers, a NASA astronaut and a Russian cosmonaut toward the space station on Dec. 21 from Baikonur Cosmodrome in the central Asian nation of Kazakhstan. The space capsule arrived at the station on Friday (Dec. 23), with the trio joining three other crewmates already aboard the orbiting lab for the holidays.

In Germany, photographer and skywatcher Roman Breisch and his family were on their way from their home in Erdweg (about 20 miles northwest of Munich) to his parents' home nearby for Christmas Eve when they spotted the fireball.

"As an engaged astrophotographer I always have my eyes at the night sky, and so as we left our home village I noticed something in the northwest, what looked like a plane diving through the clouds to continue the approach to the Munich Airport, which happens frequently," Breisch told SPACE.com in an email. "But this time it looked strange because the shine of the landing lights showed [backward] instead of forward … I looked closer and saw, that this wasn't one of the planes that we [were] watching frequently."

Breisch stopped his car and pulled out a camera from the trunk to capture the fireball.

"Meanwhile, the object was right north of us and began to disintegrate into hundreds of shiny pieces, a look that [reminded] me of the pictures I saw of the space shuttle tragedy over the U.S. some years ago," Breisch said, referring to the 2003 shuttle Columbia disaster.

Breisch managed to snap two photos before the re-entering rocket stage was obscured by clouds. After calling the police to warn them that they might receive calls about the fireball, Breisch and his family continued on their merry way.

Photographer Viktor Eske, also in Germany, managed to record a video of the rocket stage's re-entry, which he posted on YouTube.

"This is what the Christmas star looks like in the 21st century," Breisch told the skywatching website Spaceweather.com.