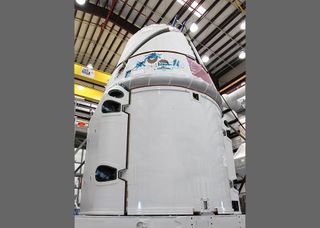 SpaceX tweeted on Jan. 4, 2012: "First look: Dragon Spacecraft in final processing, getting ready to head to the ISS."
(Image: © SpaceX)

The astronauts living on the International Space Station (ISS) are gearing up for a milestone event in February — the first visit of a commercial spaceship to the orbiting outpost.

The private spaceflight company SpaceX plans to launch its unmanned Dragon capsule to orbit Feb. 7 atop the firm's Falcon 9 booster from Cape Canaveral Air Force Base in Florida. The capsule will carry a load of food, clothing and other supplies for the six-man crew of the space station.

"We're excited about that," NASA astronaut Don Pettit told SPACE.com in an interview Wednesday (Jan. 4) from the station. "Anytime you have a visiting vehicle coming by, that's an exciting day."

The Hawthorne, Calif.-based SpaceX is the first of a number of companies vying to fly test flights to the International Space Station. NASA has also awarded funding to the Orbital Sciences Corp. of Dulles, Va., which is developing the Cygnus spacecraft to fly on its Taurus 2 rocket.

Dragon is due to make an automated rendezvous with the International Space Station at about 240 miles (386 kilometers) above the Earth. Once it approaches within a few meters of the laboratory, astronauts inside will use the station's robotic arm to grab hold of the capsule and attach it to the outpost.

"It's going to be packed with all kinds of supplies for us, and it's sort of the first of many wagon trains coming up here to bring us supplies," Pettit said.

After being docked for about a week, Dragon will depart the space station, carrying cargo back down to Earth, where the capsule will be retrieved after landing in the Pacific Ocean.

"One of the neat things about the SpaceX vehicle is it will allow us to take significant payloads down, which is a real important thing," Pettit said. "Since we no longer fly shuttles, we can't take anything sizable back down from space station without it just burning up. SpaceX will be our route to getting all these scientific samples and broken pieces of hardware that need to be refurbished and things like that to the ground."

While Dragon has so far flown only unmanned missions, the capsule is eventually designed to carry people as well. NASA has also awarded funding to SpaceX under its Commercial Crew Development (CCDev) program to develop Dragon as a ferry for its astronauts, who must ride Russian Soyuz spacecraft now that the shuttles are grounded.

"While our first missions to the ISS will be to transport cargo, both Falcon 9 and Dragon were designed to ultimately transport astronauts," SpaceX officials wrote in a Dec. 15 update. "Every trip we make to the ISS from this point forward gets us closer to that goal."

SpaceX successfully flew Dragon on its first orbital test flight on Dec. 8, 2010. The craft became the first commercial vehicle ever to launch to orbit and then be recovered safely back on Earth.