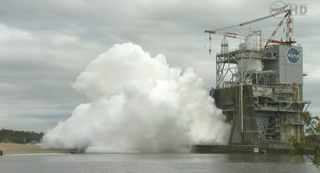 NASA test-fires the J-2X engine on Nov. 9, 2011. The J-2X is a key component of the agency's Space Launch System, the heavy-lift rocket designed to carry astronauts to the moon, Mars and other deep-space destinations.
(Image: © NASA TV)

NASA successfully test-fired a key component of its next-generation heavy-lift rocket today (Nov. 9), putting through its paces a rocket engine that could help propel astronauts to the moon and Mars.

The space agency fired up the huge J-2X engine for more than eight minutes at its Stennis Space Center in Mississippi during the afternoon test, which began at 4:04 p.m. EST (2104 GMT). The J-2X will serve as the upper stage of NASA's Space Launch System, the $10 billion heavy-lift rocket slated to start launching astronauts toward deep-space destinations by 2021 or so.

The J-2X filled the humid Mississippi air with a deafening roar and clouds of billowing grayish-white vapor for the planned 500 seconds — the length of time it would burn during an actual mission.

"Engine runtime 499.97 [seconds]," a test coordinator said when the rocket finally shut down, prompting applause from the engineers and technicians gathered in the control room at Stennis.

While engineers have only just begun analyzing data from the test, early returns suggest the J-2X did very well, officials said.

"The engine performed exactly as we expected it to," Mike Kynard, NASA's SLS liquid engines element manager, said in a post-test news conference. "The first look is, it ran great."

Both of these engines burn liquid hydrogen and liquid oxygen, and are built by aerospace firm Pratt & Whitney Rocketdyne. The Space Launch System will also use some booster rockets to help it get off the ground, NASA officials have said. [Gallery: NASA's Space Launch System]

In its early incarnations, the SLS will likely be capable of lofting 70 tons of payload, but NASA eventually wants to beef it up to carry 130 tons of material to space. That super-hefty version would be 10 to 20 percent more powerful than the massive Saturn V rockets that launched astronauts to the moon.

NASA plans to use the Space Launch System to loft astronauts into orbit aboard the Orion Multi-Purpose Crew Vehicle, which is also in development.

The huge rocket won't be ready for its first test flight until December 2017, but NASA recently said it wants the Orion capsule to take its first unmanned trip to space in 2014. So Orion's first test flights will likely come aboard a different rocket, perhaps a Delta 4.

Since mothballing the shuttles in July of this year, NASA has been completely dependent on Russian Soyuz vehicles to get its astronauts to and from low-Earth orbit. The agency plans to rely on private space taxis built by commercial companies to ferry astronauts to and from low-Earth orbit until the Space Launch System and Orion can be ready for their first deep space missions.

NASA hopes that at least one of the several private space taxi efforts it is backing will be up and running by 2015. That will free the space agency up to focus on getting humans to destinations in deeper space, such as asteroids and Mars.

"The future is bright for exploration, recognizing we do live in a constrained budget environment at this point," said Daniel Dumbacher, NASA's deputy associate administrator for exploration systems development. "This is an early step, but it's evidence that we're making progress."