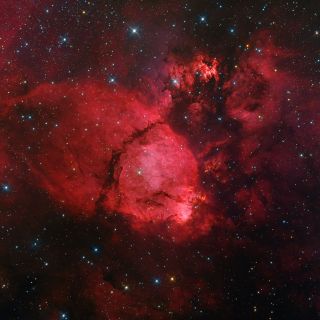 NGC 896 Emission Nebula in constellation Cassiopeia is located some 7500 light-years from Earth in the Heart Nebula. A light-year is the distance light travels in one year, or about 6 trillion miles (10 trillion kilometers).
(Image: © Bob and Janice Fera)

Located about 7,500 light-years from Earth in the brightest part of the Heart Nebula, is the brilliant NGC 896 Emission Nebula in constellation Cassiopeia.

Skywatching enthusiasts Bob and Janice Fera took this spectacular image between Sept. 26 and 27 at the Eagle Ridge Observatory, Foresthill, Calif. Multiple exposures are made to collect enough light for an image that would otherwise not be evident to the eye.

In the image, the nebula NGC 896 appears awash in bright red hues, with streaks of black created by interstellar dust.

NGC 896 is an emission nebula of glowing gas and darker dust lanes situated in the Perseus Arm in the northern sky. Plasma of ionized hydrogen and free electrons formed this nebula, which was first discovered by Friedrich Wilhelm Herschel in 1787. It forms only part of the larger Heart nebula.

In the sky Cassiopeia sits with Andromeda on the South side, Perseus on the South East and Cepheus to the North. She is opposite the Big Dipper, and can be seen the clearest in early November. In Greek mythology it was considered to represent the vain queen Cassiopeia, who boasted about her unrivaled beauty.