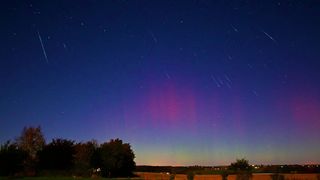 The much-anticipated outburst of Draconid meteors hit its peak on schedule Saturday (Oct. 8), amazing amateur astronomers outside the United States despite predictions that the bright moon would dampen the shooting star display.

Meteor experts anticipated a brief spike in activity for this year's Draconid meteor shower at around 4 p.m. EDT (2000 GMT) as the Earth interacted with a dense stream of meteoric particles shed in the year 1900 by the periodic comet Giacobini-Zinner. In addition, Earth was also expected to pass through several other less-dense particle streams shed by this same comet during the late 19th century in the few hours leading up to the peak.

While the meteor shower's prime viewing time was during the daylight hours in North America, forcing U.S. skywatchers to miss out, observers in Europe and other countries did see amazing views, according to reports. [Photo Gallery: The 2011 Draconid meteor shower]

Draconids vs. the moon

According to observers with clear skies in Europe, a short-lived, yet intense, display of meteors was visible as soon as the sky became dark.

"My daughter Sammy (12) and I watched for two hours in between clouds and counted over 30," skywatcher Pete Glastonbury  of Devizes, Wiltshire, in the United Kingdom, told SPACE.com in an email. "Most were small but a few were very bright even though they were behind thin, fast moving clouds." [Video: Draconid meteor shower of October]

Based on a consensus of observations reported to the International Meteor Organization, peak activity was attained at or just minutes after 4 p.m. EDT, when the zenithal hourly rate was reported to be around 300 meteors. Some reports suggested the peak could have been even more impressive.

"Preliminary counts suggest a peak rate of 660 meteors per hour at 2010 UT (4:10 pm EDT)," the skywatching website Spaceweather.com reported Sunday. Many skywatchers uploaded their images to Spaceweather.com after the Draconid shower's peak.

"The conditions were difficult, the moon shined bright, and took away a lot of the meteors in the glare," Grønne told SPACE.com in an email, adding that he used multiple cameras (including one with a fish-eye lens) and filters to catch 14 colorful meteors. "To my big surprice aurora was visible a few minutes, it was above central Norway, but visible from Denmark (about 500 miles). Visually it was very faint, but it was there."

The zenithal hourly rate (ZHR) is a value which assumes that the emanation point of the meteors (called the radiant) is directly overhead, under a dark starry sky with no bright moon. In truth, however, observing conditions were far from these ideal conditions.

A very bright waxing gibbous moon was high in the southeast sky during the peak of the shower and the Draconid radiant while not overhead, was well up in the northwest sky. So the estimated zenithal hourly rate of 300 meteors is really a heavily corrected value, chiefly taking into account the bright moon which in reality probably hid many of the fainter Draconid streaks.

Still, it appears that the 2011 Draconids were quite an impressive show, if short-lived.

Karl Antier watched from Provence in southeastern France on the Valensole Plate. Antier estimated a peak of around 400 meteors. Soon after it became sufficiently dark around 1830 GMT (2:30 p.m. EDT), he started seeing numerous Draconids, though they appeared generally very short and faint. [Photos: The Perseid Meteor Shower of 2011]

At one point Antier reported seeing 4 to 5 meteors per minute. Meteor activity then began to fall, but then suddenly the meteors became brighter and accompanied by longer paths. By 2230 GMT (6:30 p.m. EDT), the show was pretty much over as only one or two were seen.

Bernd Brinkmann, watching about 12.4 miles (20 kilometers) east of Cologne, Germany, reported 15 Draconids in 20 minutes, many of which ended their short flight in a flash of light.

Shy Halatzi watched from Israel's Arava Desert. "We can confirm the Draconids outburst has occurred around the predicted times. The highest visual rate seems to have been around 19:50 to 20:10 UT (3:50 to 4:10 p.m. EDT), a time period in which I observed 14 Draconids, which corresponds to a ZHR of a few hundreds, I estimate," he said.

Halatzi reported that the meteor shower spiked again at around 1700 GMT, with the brightest Draconid meteor being nearly twice as bright as Sirius, the brightest star in the sky.

North Americans unfortunately could not view any of the meteors directly because the peak of the shower occurred during the daytime. But they could listen to the Draconids over radio.

Since the luminous trails that are produced as the tiny dust particles shed by the comet zip through Earth's atmosphere at 12 miles per second (19 km per second) they make effective reflectors of radio signals. This allowed radio amateurs to listen for the sound of distant radio signals that are briefly "bounced" off the ionization trails caused by these meteors; they sound like "pings" or "whistles." You can hear examples of the radio sounds from meteors via Spaceweather.com.

Michael Boschat of Halifax, Nova Scotia, listened for Draconids utilizing a simple dipole antenna to receive TV analog signals at 67.24 MHz. At 2 p.m. EDT (1600 GMT), he heard only 34 meteors, but this jumped three hours later to 105 meteors and between 2000 and 2100 GMT, when he heard 338 events.

Joe Rao serves as an instructor and guest lecturer at New York's Hayden Planetarium. He writes about astronomy for The New York Times and other publications, and he is also an on-camera meteorologist for News 12 Westchester, New York. SPACE.com managing editor Tariq Malik contributed to this report.