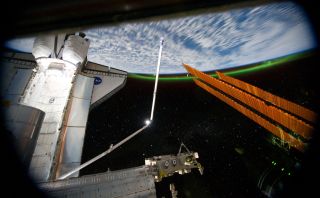 This panoramic view from the International Space Station, looking past the docked shuttle Atlantis' cargo bay and part of the station including a solar array panel toward Earth, was taken on July 14, 2011 as the spacecraft passed over the Southern Hemisphere. Aurora Australis or the Southern Lights can be seen on Earth's horizon and a number of stars are visible also.
(Image: © NASA)

HOUSTON — Atlantis astronauts are spending their last full day at the International Space Station before departing for the return trip to Earth as they enter the homestretch of NASA's final space shuttle mission.

The crew awoke Sunday night at 10:29 p.m. EDT (0229 GMT) to the song "Days Go By" by country star Keith Urban, played along with a recorded video message from workers here at NASA's Johnson Space Center. The crew is working an overnight schedule as they pack up Atlantis for the trip home.

"Good morning, Atlantis, from all of us at the Johnson Space Center. Have a great day!" the crowd shouted while holding up signs for the crew in the video.[Photos: NASA's Last Shuttle Mission In Pictures]

"Well, good morning, Houston," replied Atlantis' mission specialist Rex Walheim. "The days do go by, so we better start living and we are. We are enjoying every minute up here. Thanks so much for the greeting from the Johnson Space Center, our home — home of some of the hardest working, most talented people who have made some incredible things happen in spaceflight."

Commander Chris Ferguson is leading the crew of four, including pilot Doug Hurley and mission specialists Walheim and Sandra Magnus. The spaceflyers are the last to travel on a space shuttle. After this mission, NASA will retire its three space shuttle orbiters to museums.

The four shuttle astronauts will have to say goodbye to their six counterparts on the space station — Expedition 28 commander Andrey Borisenko and flight engineers Alexander Samokutyaev and Sergei Volkov of Russia, as well as NASA astronauts Mike Fossum and Ron Garan and Japanese spaceflyer Satoshi Furukawa.

Ferguson and his crew will board Atlantis and close the hatch between it and the orbiting laboratory on Monday (July 18) at 9:19 a.m. EDT (1319 GMT), marking the end of the final visit of a space shuttle to the space station. Atlantis is due to undock from the outpost on Tuesday (July 19) at 2:28 a.m. EDT (0628 GMT).

"Will tomorrow's [farewell] ceremony be especially poignant? I'm sure it will for the crew and the folks on the ground," space station flight director Chris Edelen said during a press briefing Sunday. "Seeing the space shuttle be retired is like seeing a good friend retiring."

But before closing the doors, the Atlantis STS-135 crew has some final packing to do, to load Atlantis with as much trash and broken hardware as it can carry back to the ground. Magnus and Hurley will use a robotic arm to move a storage module called Raffaello, packed to the brim with cargo, from the outside of the space station into Atlantis' payload bay.

Raffaello is one of three Italian-built Multi-Purpose Logistics Modules (MPLMs) that are packed on space shuttles for use transporting cargo up and down from orbit. Over 10 years of shuttle trips to the International Space Station, Rafaello and its siblings have brought up a cumulative total of 50 tons of cargo, and carried down 20 tons, said the mission's lead transfer officer, Jeremy Owen. [9 Weird Things NASA Flew on Space Shuttles]

"The MPLMs have served us well and they've been incredible workhorses," Owen told Magnus late Sunday (July 17). "Hats off to you and your crew, you guys have done an outstanding job" packing and unpacking.

"It really did go smoothly for that we were working pretty hard," Magnus replied, thanking Owen and the rest of the ground team for their work choreographing the job.

After the mission, Atlantis will be prepared for its retirement home at the Kennedy Space Center Visitors Center, where it will go on public display. Its sister orbiters, Discovery and Endeavour, are bound for the Smithsonian National Air and Space Museum and the California Science Center, respectively.