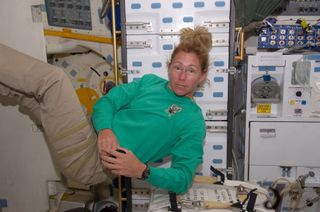 NASA astronaut Sandy Magnus, STS-135 mission specialist, is pictured on the middeck deck of the space shuttle Atlantis during a brief break in the flight's second day of activities in Earth orbit.
(Image: © NASA )

NASA astronaut Sandy Magnus may be hard at work as part of the last space shuttle crew ever to fly in orbit, but that hasn't kept her from keeping track of the latest soccer winners in the 2011 Women's World Cup finals.

Magnus, 46, asked Mission Control in Houston to send updates on the scores and news from the Women's World Cup during her 13-day mission on shuttle Atlantis, which is delivering supplies to the International Space Station. This year, the international women's soccer competition is in Germany, where it runs through July 17.

Yesterday (July 13), the U.S. team defeated France by a score of 3 to 1 in a World Cup semifinal match.

Team USA will face Japan in the final on Sunday (July 17), according to FIFA officials.

According to Magnus' NASA biography, the game of soccer is one of her favorite hobbies. Cooking is another, and Magnus has a reputation for being a talented space food chef.

Mission Control has been radioing the Women's World Cup scores to Magnus during daily discussions over the progress of cargo transfer work at the linked shuttle and space station. Atlantis delivered a cargo pod filled with 5 tons of supplies for the space station's six-man crew. [Photos: NASA's Last Shuttle Mission in Pictures]

"When I heard that Japan had defeated Germany, I was really shocked," Magnus said earlier this week, referring to the July 9 match in which Japan beat Germany 3 to 1.

Before Atlantis launched into space on July 8, Magnus had been following the Women's World Cup on television in between training sessions.

"I have been trying to catch as many women's world cup games as possible and have asked that they send me the scores," Magnus told the followers of her Twitter page, where she posted updates on her spaceflights under the name @Astro_Sandy.

Magnus isn't the only Atlantis astronaut trying to keep tabs on Earth sporting events while soaring above the planet.

Soccer aside, Magnus has the distinction of being the last woman ever to fly on a NASA space shuttle. She is one of four astronauts aboard Atlantis' STS-135 mission, which is flying on the 135th shuttle flight since the fleet first began launching into space in 1981.

NASA is retiring the shuttle fleet this year after three decades of service to make way for a new program aimed at deep space exploration.

"I am the last female on the space shuttle, but it's sort of a soft milestone because it's not like we're never flying females again ever. Williams is coming up soon to be the next station commander, and Karen Nyberg is in training and we have several females in the office lined up to get assigned after that," Magnus told SPACE.com. "So yes, I'm the last female on the shuttle, but look, we're continuing to fly people to the space station, and some of them are females, and that's all good."

A native of Belleville, Ill., Magnus has degrees in physics and electrical engineering, as well as a Ph.D. in materials science and engineering. She joined NASA's astronaut corps in 1996 and first flew in space in 2002 during the STS-112 mission, a flight that was also on Atlantis.

She returned to space in 2008, launching on the shuttle Endeavour, and joined the space station's Expedition 18 crew for a six-month stay on the orbiting laboratory. Magnus returned home from that mission in March 2009 aboard the shuttle Discovery, meaning that she had flown on all three of the NASA shuttles that make up the current fleet.

"Well, I certainly feel honored to be part of the last crew," Magnus said in a NASA interview before flight. She added that because Atlantis' final crew is smaller than normal (four people as opposed to the normal six or seven), there were some special skills required to fill in for the missing hands.

"I'm very flattered that it’s felt that I have that skill set that is needed to do that," Magnus said.