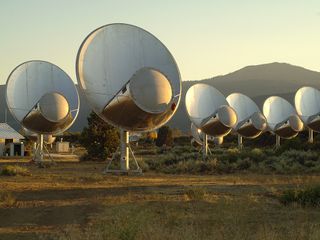 In the past three decades, scientists have found more than 4,000 exoplanets. And the discoveries will keep rolling in; observations suggest that every star in the Milky Way galaxy hosts more than one planet on average.

Given a convergence of ground- and space-based capability, artificial intelligence/machine learning research and other tools, are we on the verge of identifying what is universally possible for life — or perhaps even confirming the existence of extraterrestrial intelligence?

Is 2020 the celestial payoff year, in which objects of interest are found to offer "technosignatures," indicators of technology developed by advanced civilizations?

Space.com asked top SETI (search for extraterrestrial intelligence) experts about what next year may signal regarding detecting other starfolk.

"Well, despite being the widely celebrated 100-year anniversary of the election of Warren G. Harding, 2020 will not likely gain fame as the year we first discover extraterrestrial life," said Seth Shostak, a senior astronomer at the SETI Institute in Mountain View, California.

The search for intelligent beings elsewhere, Shostak said, is largely conducted by checking out nearby star systems for either narrow-band radio signals or brief flashes of laser light. And those might succeed at any time, he told Space.com.

"But one should remember that this type of search is gaining speed in an exponential fashion, and that particular technical fact allows a crude estimate of when SETI might pay off. If we take — for lack of a better estimate — Frank Drake's opinion that there might be 10,000 broadcasting societies in the Milky Way, then we clearly have to examine at least one [million] – 10 million stellar systems to have a reasonable chance of tripping across one. That goal will be reached in the next two decades, but certainly not in 2020," Shostak said.

But there are still reasons for intelligent-alien hunters to be excited and optimistic about the coming year. Multiple existing projects will either be expanded or improved in 2020, Shostak said. For example, the SETI Institute will get new receivers for the Allen Telescope Array in northern California, and both the SETI Institute and the University of California, Berkeley, will conduct new searches for possible laser technosignatures.

"And, of course, there's always the unexpected," Shostak said. "In 1996, the biggest science story of the year was the claim that fossilized Martian microbes had been found in a meteorite. No one really saw that coming. So one can always hope to be taken by surprise."

"I am skeptical about picking a specific year for the first discovery. Previous predictions of success have been wrong," said Michael Michaud, author of the thought-provoking book "Contact with Alien Civilizations: Our Hopes and Fears about Encountering Extraterrestrials" (Copernicus, 2007).

"I and others have observed that the continued improvement of our search technologies and strategies could boost the odds for success," Michaud said, noting that the primary focus of SETI remains on radio signals. "However, we still don't cover all frequencies, all skies, all of the time. Other types of searches have failed, too, such as looking for laser signals or Dyson spheres [ET mega-engineering projects]. Those campaigns usually have limited funding and often don't last long."

A new possibility has arisen because of exoplanet discoveries, Michaud said: "In some cases, astronomers now can look for chemical evidence of life in planetary atmospheres. It is conceivable that we will find simple forms of life before we find signals from a technological civilization."

If astronomers do someday confirm a SETI detection, how should they announce the discovery? It is an old question that has been answered in several ways.

"The prevailing opinion among radio astronomers has been that the news will leak quickly. If that is correct, scientific and governmental authorities won't have much time for developing a public-affairs strategy," Michaud said.

"It remains possible that the sophisticated monitoring capabilities of intelligence agencies might be the first to detect hard evidence," Michaud said. "One might think that the government would have a plan to deal with such an event."

But, Michaud said that his own experience suggests that such plans are unlikely to be drawn up due to a "giggle factor" and would be forgotten as officials rotated out of their positions. He previously represented the U.S. Department of State in interagency discussions of national space policy.

"While I'm enthusiastic at the reinvigoration of technological-signatures work, and in particular the growth in looking across much of the electromagnetic spectrum, I think this is going to be a long-term project. I estimate a very small probability of success in any given year," said Pete Worden, executive director of the Breakthrough Initiatives. "But those chances are now orders of magnitude better than they were even a decade ago."

"The Breakthrough Initiatives is committed to full and immediate disclosure of any and all results," Worden said. "We would rely on the principal investigators of our projects, along with their home institutions, to prepare and release both scientific reports and public announcements."

Related: How Long Will It Take to Find Proof of Alien Life?

Despite the ongoing work by Breakthrough Listen, NASA's Transiting Exoplanet Survey Satellite (TESS) and research into the detection of promising biosignatures and technosignatures, there's no reason to think 2020 would be the year for discovery, said Steven Dick, a recognized astrobiology scholar and writer of the award-winning book "Astrobiology, Discovery, and Societal Impact" (Cambridge University Press, 2018).

"In my view, all these things combine to increase the chances over the next decade of finding extraterrestrial intelligence. I would caution, though, that any discovery will be an extended process, consisting of detection and interpretation before any understanding is achieved," Dick said. "This is clear from the history of discovery, even when we thought we had evidence in hand."

Like Shostak, he cited the Mars meteorite ALH 84001, which in 1996 generated excitement and debate that ancient, microscopic life existed on the Red Planet.

"One thing that is certain is that we are getting a better handle on the issues of societal impact, should such a discovery be made. Many more social sciences and humanities people are getting involved in astrobiology, which is all to the good. In other words, we are preparing for discovery," Dick said. "So, I see the search advancing incrementally next year, but with an accelerating possibility that life will be discovered in the near future."

"We are right now on the verge of finding out whether there is life elsewhere in the universe, and there are three ways we could find it. Think of it as a three-way horse race to find ET," Vakoch said.

But will any of the horses cross the finish line in 2020?

It all depends on the prevalence of life beyond Earth, Vakoch said, and the number of targets we can scan with available technologies — whether these instruments are located in Earth-based observatories, in space-based telescopes or in craft that travel to other planets and moons in our solar system, Vakoch told Space.com.

So, will scientists find intelligent alien life next year?

"It all depends on how plentiful intelligent extraterrestrials are. If one in 10,00 star systems is home to an advanced civilization trying to make contact, then we're behind schedule in making first contact, and the news we're not alone in the universe could well come in 2020," Vakoch said.

And there are expectations for microbial life, similar to Earth's bacteria, to be even more widely spread throughout space than intelligent life.

But bacteria can't send us radio signals. "We need to develop new technologies to discover them at a distance," Vakoch said. "As the next generation of space telescopes is launched, we will increase our chances of detecting signs of life through changes to the atmospheres of planets that orbit other stars, giving us millions of targets in our search for even simple life in the cosmos."

By the end of 2020, we'll be within a few months of the much-awaited launch of NASA's James Webb Space Telescope, Vakoch said, which will be able to study the atmospheres of exoplanets for potential signs of life. But it could take much longer, until after the launch of the European Space Agency's Atmospheric Remote-sensing Infrared Exoplanet Large-survey, or ARIEL, in 2028, before we have "definitive proof" of extraterrestrial microbes through telltale alterations in the atmospheres of exoplanets, Vakoch said.

There are a number of spacecraft in the proposal stage that could conceivably detect extraterrestrial life within our solar system, "but don't hold your breath for discovery by 2020," Vakoch said. "But if we do someday find even microbial life elsewhere in our solar system that has an independent origin from terrestrial life, then we would know that the entire universe is chock-full of life."

Humans cannot control whether or not there is life elsewhere in the universe, of course.

"To be human is to live with uncertainty," Vakoch concluded. "If we demand guarantees before we begin searching, then we are guaranteed to find nothing. But if we are willing to commit to the search in the coming year and long afterwards, even without knowing we will succeed, then we are sure to discover that there is at least one civilization in the universe that has the passion and the determination to understand its place in the cosmos — and that civilization is us."