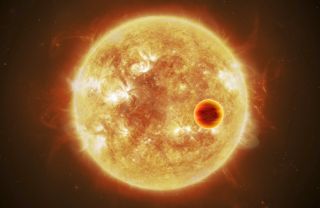 Getting a better handle on exoplanet diversity and evolution seems to be a high priority for the European Space Agency (ESA).

ESA has selected the Atmospheric Remote‐sensing Infrared Exoplanet Large‐survey (ARIEL) project as its next medium-class space mission, with a launch targeted for 2028.

If all goes according to plan, ARIEL will be the third ESA exoplanet mission to lift off in a 10-year span. ARIEL will study the atmospheres of hundreds of exoplanets, looking for a link between the composition and chemistry of the alien worlds and those of their host stars, ESA officials said. [Gallery: The Strangest Alien Planets]

"ARIEL is a logical next step in exoplanet science, allowing us to progress on key science questions regarding their formation and evolution, while also helping us to understand Earth's place in the universe," Günther Hasinger, ESA's director of science, said in a statement Tuesday (March 20). "ARIEL will allow European scientists to maintain competitiveness in this dynamic field. It will build on the experiences and knowledge gained from previous exoplanet missions."

Such previous missions include ESA's COROT (Convection Rotation and Planetary Transits) spacecraft, which operated from 2007 through 2012, and NASA's prolific Kepler space telescope, which has discovered about two-thirds of the roughly 3,500 confirmed alien planets to date. And, by the time ARIEL lifts off, several other exoplanet missions will have made contributions as well.

For example, NASA's Transiting Exoplanet Survey Satellite (TESS) is scheduled to launch next month, on a mission to discover alien worlds circling some of the sun's nearest neighbors. And ESA's Characterizing Exoplanets Satellite (CHEOPS) will measure the diameters of alien planets whose masses are already known, allowing their approximate composition (rocky versus gaseous) to be deduced. CHEOPS should be ready to lift off by the end of this year, ESA officials have said.

Europe is also developing a mission called PLATO (Planetary Transits and Oscillations of Stars) for launch in 2026. This spacecraft will hunt for rocky alien worlds that could be capable of supporting life. (In addition, an ESA mission called Gaia, which launched in December 2013, is expected to discover thousands of alien planets as part of its work to map and monitor 1 billion Milky Way stars.)

Like COROT and Kepler, all of these upcoming missions — TESS, CHEOPS, PLATO and ARIEL — will use the "transit method" in their exoplanet work. That is, they will note and/or study the tiny brightness dips caused when alien worlds cross the faces of their host stars from the telescopes' perspective.

ARIEL will focus on planets orbiting relatively close to their stars, ESA officials said. The spacecraft will launch to the Earth-sun Lagrange point 2, a gravitationally stable point about 930,000 miles (1.5 million kilometers) from our planet, and then use its 3.3-foot-wide (1 meter) telescope to investigate, for at least four years, the atmospheres of planets circling various types of stars.

"As well as detecting signs of well-known ingredients such as water vapor, carbon dioxide and methane, it will also be able to measure more exotic metallic compounds, putting the planet in context of the chemical environment of the host star," ESA officials said in the same statement. "For a select number of planets, ARIEL will also perform a deep survey of their cloud systems and study seasonal and daily atmospheric variations."

ARIEL will collect data in visible and infrared wavelengths of light, they added.

Medium-class ESA missions like ARIEL (and PLATO) have a cost cap of around 500 million euros ($610 million). CHEOPS is a small-class project, meaning it costs about 50 million euros ($61 million). Under its long-term Cosmic Vision space-science program, ESA is also working on large-class missions, which top out at around 1 billion euros ($1.2 billion).

ARIEL beat out two other finalists for the upcoming medium-class slot: a plasma-physics mission called THOR (Turbulence Heating Observer), and XIPE (X-ray Imaging Polarimetry Explorer), which would have studied radiation emissions from high-energy sources such as supernovas and black holes.

You can learn much more about ARIEL here: https://ariel-spacemission.eu