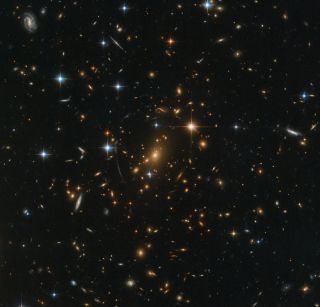 Breakthrough Listen is searching the universe for signals from alien technology, and the project recently announced that its made the largest data release ever in the search for extraterrestrial life.

The $100 million endeavor aims to scan 1 million stars in our neighborhood, 100 nearby galaxies and the plane of the Milky Way. According to a recent statement, the project has already cast a massive net in its quest to catch an alien signal or two. That hasn't happened yet, but the project still has news to report.

In a statement released Tuesday (June 18), Breakthrough Listen said it has collected almost 1 petabyte of digital data, or 1 million gigabytes, which is accessible to the public.

"This data release is a tremendous milestone for the Breakthrough Listen team," Danny Price, Breakthrough Listen Project Scientist for the Parkes Radio Telescope, said in the statement. "We scoured thousands of hours of observations of nearby stars, across billions of frequency channels. We found no evidence of artificial signals from beyond Earth, but this doesn't mean there isn't intelligent life out there: we may just not have looked in the right place yet, or peered deep enough to detect faint signals."

Breakthrough Listen's science team at the University of California, Berkeley's SETI Research Center came up with a way to analyze the large swaths of information for what scientists call "technosignatures." That category represents the potential footprints of technologies like transmitters and propulsion devices, but these signals are difficult to tease out from human-made technological chatter. Researchers described the techniques they are using to review the data in two upcoming studies, according to the statement.

Related: Is Anyone Out There? New SETI Tool Keeps Track of Alien Searches

Breakthrough Listen officials say the project's researchers are listening in to a range of radio and optical wavelengths. So far, their ears are the Green Bank Radio Telescope in West Virginia and the Parkes Radio Telescope in Australia, with more facilities set to begin collecting observations soon.

Founded in 2015 by Israeli-Russian billionaire Yuri Milner, Breakthrough Listen has now submitted a broader analysis of 1,327 stars, which officials said is about 80% of its nearby star sample.

"While we have been making smaller subsets of data public before in varying forms and contexts," Matt Lebofsky, lead system administrator of Berkeley's Search for Extraterrestrial Intelligence (SETI) Research Center, said in the statement, "we are excited and proud to offer this first cohesive collection along with an instruction manual, so everybody can dig in and help us search. And we're just getting started — there's much more to come!"

The unpublished papers describing the work of Breakthrough Listen are available on the SETI Berkeley website.