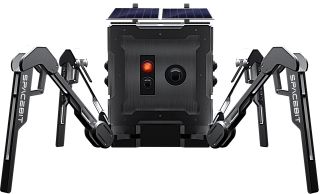 The United Kingdom is set to make its own giant leap soon, with a very small rover.

A 2.2-lb. (1 kilogram), four-legged robot built by London-based Spacebit will launch aboard Astrobotic's Peregrine moon lander in July of 2021, representatives of both companies announced recently.

It will be a flight of firsts — the first mission for both Peregrine and its rocket, United Launch Alliance's new Vulcan Centaur; the first trip to the moon's surface by a UK-built craft; and the first time a legged robot has explored another world.

"We could not be more excited to fly this mission with Astrobotic," Spacebit CEO Pavlo Tanasyuk said in a statement late last month. "This mission will result in the first payload from the UK to reach the moon surface and mark the beginning of a new era in commercial space exploration for Britain."

The rover will move at least 33 feet (10 meters) on the lunar surface and beam high-definition video and other data home to its handlers during its 10-Earth-day mission, Spacebit representatives said.

And this mission will be just the beginning, if all goes according to plan. Eventually, Spacebit aims to launch a fleet of these little robots to explore the lunar subsurface and near subsurface — especially lava tubes that would be a good place for a human settlement, company officials have said.

Spacebit has other ambitions as well, as its website makes clear: "Our main goal is to democratize access to space by tokenizing all of our commercial space missions around the Earth, the moon and beyond. By decentralizing our missions, we also enable citizens to directly take part in or benefit from space programs."

Spacebit's walking rover won't be flying alone on the July 2021 mission; it's one of about 30 payloads that Peregrine will carry to the lunar surface for a variety of customers. Fourteen of those payloads are from NASA, which granted Astrobotic a $79.5 million award for the mission this past May via the agency's Commercial Lunar Payload Services program, or CLPS.

Two other companies got similar CLPS funding: Intuitive Machines, which received $77 million, and Orbit Beyond, which snared $97 million. Intuitive Machines is still shooting for a summer 2021 mission with its Nova-C lunar lander, but Orbit Beyond recently dropped out, saying that it could not meet its ambitious September 2020 target.

The upcoming commercial landings will be historic. To date, successful moon landings have been pulled off only by the government space agencies of three superpowers — the Soviet Union, the United States and China.

Two other entities attempted robotic lunar landings this year, but both were unsuccessful. Israel's SpaceIL tried to land the first private moon mission this past April, and India's Chandrayaan-2 lander attempted a touchdown near the lunar south pole last month. The Chandrayaan-2 mission includes a moon orbiter, which is still going strong.