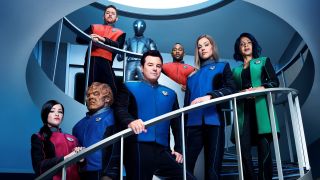 The cast of "The Orville."
(Image: © Andrew Eccles/Fox)

"The Orville" fans all suspected it would happen — why wouldn't it? But, like an end-of-season cliffhanger, Fox did keep us waiting for a while there, just long enough for us to get a teeny-tiny bit nervous.

Thankfully, though, it's official now, as news that "The Orville" will be renewed for a third season was confirmed over the weekend.

According to Deadline, even before Fox confirmed the third season, "The Orville" was approved for $15.8 million in the latest round of TV tax credits (offered on a state-by-state basis throughout the U.S. to encourage in-state film production). That's up from the $14.5 million incentive the show got for Season 2.

While landing a tax credit did not guarantee a pickup, it certainly improved the chances. The series reportedly also has strong support from the network.

"The Orville" has developed a devoted fan base, although Season 2 dropped in ratings compared to the first season. According to Deadline, the new season averaged 5.4 million total viewers (multiplatform audience of adults ages 18-49) compared to an average of 10.7 million during the show's first season.

Season 2 had its highlights. The premiere episode, "Ja'loja," was arguably the best of the entire season, and the thrilling two-parter "Identity" gave us one of the best space battles ever seen on the small screen.

There's no word yet on how many episodes will be in the third season or when it will air. More details could be announced at San Diego Comic-Con in July or New York Comic Con in October.

Season 2 of "The Orville" can be viewed on demand on Fox Now and Hulu. It's also available on Fox.com in the U.S. You can buy the first season of "The Orville" on DVD, and you can also get a season pass from Amazon.