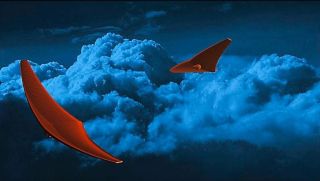 Researchers are designing a stingray-shaped spacecraft to explore the dark side of Venus.
(Image: © CRASH Lab, University at Buffalo)

Could a stingray-shaped spacecraft get to the dark side of Venus by flapping its wings?

Researchers at the University of Buffalo (UB) are designing a spacecraft shaped like a stingray that could explore Venus in ways never before possible. The craft, designed as part of the Bio-inspired Ray for Extreme Environments and Zonal Explorations (BREEZE) project, is one of 12 selected by NASA for the agency's Innovative Advanced Concepts (NIAC) program, which supports new, innovative technologies.

The craft, proposed by a team at the university's Crashworthiness for Aerospace Structures and Hybrids (CRASH) Laboratory, will travel in part by flapping its wings (which will look and work like a stingray's pectoral fins) in Venus' windy, upper atmosphere. These flapping fins are designed to make use of the high winds in that region while allowing the team to be able to easily control and manipulate the craft.

"By taking our cues from nature, specifically sea rays, we’re looking to maximize flight efficiency. The design will allow for a so-far unattained degree of control for such a spacecraft that would be subject to severe zonal and meridional winds on the planet," Javid Bayandor, an associate professor of mechanical and aerospace engineering at UB and the project’s lead investigator, said in a statement.

Once it arrives at our neighboring planet, BREEZE is designed to travel around Venus every four to five days. It will be powered by solar panels that will charge when the craft is on the side of the planet lit by the sun, which will happen every two to three days. But the strange little stingray spacecraft won't just travel to and around Venus; it will also use specialized instruments on board to gather data, take samples of Venus' atmosphere and monitor and track weather patterns and volcanic activity.

The 'dark side' of Venus

Venus rotates more slowly than any of the other planets in our solar system — while the planet takes about 225 days to orbit the sun, it takes 243 days to rotate on its axis (so a day on Venus is actually longer than a year). Because of this, the planet has a "dark side" that faces away from the sun for extended periods of time.

The flapping, ray-like wings that the craft will use to traverse Venus are also designed with the planet's quirks in mind. Venus, with scorching surface temperatures close to 900 degrees Fahrenheit (482 degrees Celsius) and thick clouds of sulfuric acid, could be a dangerous place to send even a crewless, robotic spacecraft. But because of the wing design, which includes an internal tension system, researchers operating it would be able to adjust thrust, lift and mechanical compression, allowing for better control and stability around the inhospitable planet.

Technology like this could one day be harnessed and applied to the exploration of other mysterious, cosmic destinations like Saturn's moon Titan, according to the statement.