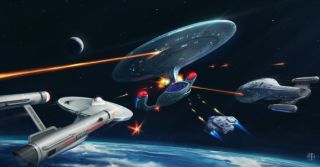 "Star Trek Timelines" puts you in command of Trek characters from every series.
(Image: © Tilted Point)

Until June 30, all players (regardless of platform) can access Jett Reno, a female human character from "Star Trek Discovery." Through July 9, players can access male human Paul Stamets from "Discovery", and female Trill Lenara Kahn from "Deep Space Nine."

"The 'Star Trek' universe has always been inclusive, and the introduction of scientist and engineer Paul Stamets in 'Star Trek: Discovery' as the first openly gay regular character showcased the series’ long-standing history of advocacy for the LGBTQ+ community," publisher Tilting Point and developer Wicked Realm Games said in a joint statement.

"The other featured character, scientist Lenara Kahn … is a member of the Trill humanoid species whose on-screen relationship with another female Trill helped tackle the taboo against homosexuality within the space-faring race," the companies added.

Anthony Rapp, an LGBTQ+ actor who plays Stamets, told Space.com in an exclusive 2019 interview that he was humbled to represent a gay character on the "Star Trek" franchise. "There was a hunger and desire within the Trek fans, and especially the LGBTQ+ Trek fandom, to have representation," he said.

The characters come as part of a new campaign by "Timelines", called Kol-Ut-Shan. This is a word in the Vulcan language for "infinite diversity in infinite combinations", the companies said. Vulcan is an alien species and language in the "Star Trek" franchise.

"Timelines" – which is licensed by CBS Consumer Products – includes content from the first 10 films and all seven television series of "Star Trek", including the latest series "Star Trek: Picard" that was released in 2020. The game has more than 800 characters and 50 starships available to participate in missions and battles.