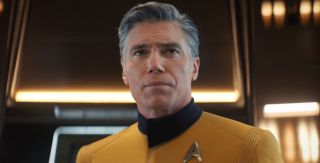 Captain Christopher Pike was without a doubt the highlight of "Star Trek: Discovery" Season 2
(Image: © CBS All Access)

Go on admit it, when the announcement was made in April 2018 that actor Anson Mount would be joining the cast of "Star Trek: Discovery," most of you were probably wondering who Anson Mount was. His biggest television role prior to this was probably in the 1860s period drama "Hell on Wheels," but he has also appeared in the shows "Inhumans," "Conviction" and he even starred opposite Robert De Niro in the movie "City by the Sea."

His journey to beloved Trek character began in January 2019 and he was quickly accepted with open arms into the "Star Trek" community. And, despite only appearing in one season so far, Mount quickly made his mark playing the firm, fair and unflappable Captain Pike. So how does Capt. Pike feel about "Star Trek"?

"Oh, you're talking to a Trekkie here," he told Space.com, not mincing any words.

Related: 'Star Trek: Discovery' Season 3: What we know and what we hope for

Space.com caught up with the Tennessee-born actor while he was relaxing on his porch with his mom, Nancy Smith, a former professional golfer.

"She's to blame actually," he laughed. "When it [Star Trek: The Original Series] started syndication on local TV here, she's the one who turned it on and told me I had to watch this. I asked her why and she told me it was about this group of people who fly around the galaxy and meet different aliens each week. And at first, I thought that's a terrible idea for a TV show and then I very quickly got hooked and I've been a huge fan ever since."

Capt. Pike is a key figure in "Star Trek" lore. He served on three Federation starships before being assigned to the USS Enterprise as Capt. Robert April's first officer. After five years, he was promoted to captain and was given command of the Enterprise (April was promoted to commodore) where he would serve as the ship's commanding officer for 15 years before the command of the Enterprise was transferred to James T. Kirk. During his tenure in Starfleet, Pike was considered to be one of the most highly decorated starship captains in Starfleet history.

"I was actually talking to them earlier in the year about the role of Captain Lorca and then they very wisely hired Jason Isaacs, who was great and did a much better job than I ever could have. But then when Pike was coming around, they called up and said, 'Hey, there's this other role, a new captain, would you mind putting yourself on tape?'

Related: The 'Star Trek: Discovery' search for Spock comes to a head in 'Light and Shadows'

"And I said, 'of course.' And they sent me dummy scripts. So the character's name on the dummy scripts was Captain Parker. And I thought, 'Well that's a terribly unimaginative name for a captain. All right, fine. I'll do it.' And I put myself on tape and then they called back the next day and they said, 'Okay, doing it and it's Captain Pike." And I just about fell out of my seat," Mount said.

Unfortunately, the character of Capt. Pike has a tragic, preordained fate in "Star Trek" history.

Ten years after the events that we saw unfold in "Star Trek: Discovery" Season 2, Pike — who has been promoted to fleet captain — is severely injured while rescuing several cadets from a baffle-plate rupture onboard a J-class training vessel. The delta-ray radiation leaves him paralyzed, unable to speak, badly scarred and forced to use a brainwave-operated wheelchair for mobility.

In the pilot episode of "The Original Series," Pike was the captain of the USS Enterprise. In the episode, entitled "The Cage," the Enterprise is en route to the Vega colony to deliver medical supplies but makes a stop to respond to a mysterious distress call coming from the crashed survey ship the SS Columbia on Talos IV. An away team beams down, but Pike (played then by Jeffrey Hunter) is abducted and held in a zoo-like cell. The Talosians take control of his mind, creating various illusions based on pleasure and pain in an "experiment" to observe his behavior.

Later, in "The Original Series" two-part episode "The Menagerie" (S01 E11 & E12) the now-paralyzed Pike requests that he return to Talos IV and live out the rest of his life in the "Matrix"-like, illusion-induced dreamworld that the Talosians can offer, rather than be forever physically restricted in his cumbersome wheelchair.

While this destined ending is tragic, what life would've unfolded for Christopher Pike if the training accident hadn't happened?

"I would want the best for him, certainly," Mount said. "One of the few things I felt that I knew instinctively about Captain Pike coming in to play the role is that he probably had good parents and he definitely had good mentors … I think he would take a gracious retirement at some point. And I just think he'd probably end up teaching at Starfleet if not being the Dean," he laughed.

Mount himself graduated from the University of the South, Tennessee, in 1995. He collected his MFA in theater from Columbia University in 1998 and went on to study acting at the Michael Howard Studios, also in New York City.

While Mount is new to the franchise, there's certainly a lot of "Trek" to look forward to. "Discovery" Season 3 recently wrapped and Season 4 is rumored to be shooting back-to-back with Season 5, starting in July. "Picard" Season 2 has also been confirmed, "Section 31" has been given a second season (although principal photography for Season 1 has been delayed) plus there's "Lower Decks," the Nickelodeon series, which is thought to be called "The Prodigy," possibly a new movie directed by Noah Hawley and, rumor has it, two new, additional (so far unnamed)live-action shows.

In fact, when "Star Trek" overseer Alex Kurtzman said at the "Picard" press tour in January that two more live-action shows were planned, fans quickly reacted en masse on social media sharing their enthusiasm for one of these series to be about Capt. Pike, Ensign Spock (Ethan Peck) and First Officer Number One (Rebecca Romijn).

Kurtzman told The Hollywood Reporter that "the fans have been heard. Anything is possible in the world of 'Trek.' I would love to bring back that crew more than anything. It was a huge risk for us. One of the most gratifying things is to see how deeply the fans have embraced Pike, Spock, Number One, and the Enterprise. The idea of getting to tell more stories with them would be a delight for all of us."

When asked about this, Mount laughed, "I keep having to dissuade people from the idea that actors know anything.

"These decisions are usually made by people that you and I have never met and may never meet. And they have to determine how they want to go forward with the franchise and if I can continue to serve in that capacity, I'd love to do that. But they've got a lot of fish to fry and they've got a lot of spreadsheets to consider. I'm just happy that I don't have to do that. Because I'd be terrible at it.

"But I mean you're talking to a Trekkie who, I mean, just to sit in the captain's chair is one of the rarest honors of being a modern actor. Not a lot of people have been asked to do it. I'm certainly grateful that I was entrusted with that responsibility. And yes, of course I'd love to continue to occupy that chair. I'm not going to grouse around and be aloof about it. I'd love to."

"Star Trek: Picard" is currently airing on the paid subscription streaming service CBS All Access in the US, and in Canada on Bell Media's Space and OTT service Crave. The show is streaming exclusively on Amazon Prime Video in more than 200 countries worldwide. New episodes air within 24 hours of the premiere on CBS All Access and Space in the US and Canada, respectively.

Fans in the US can now watch "Star Trek: Picard" for free on CBS All Access using the code "GIFT." The code is valid through April 23, so you'll have to act soon to binge the series.

Seasons 1 and 2 of "Star Trek: Discovery" and a host of other original and archival CBS television shows are also available on CBS All Access. Subscriptions start at $5.99 a month.