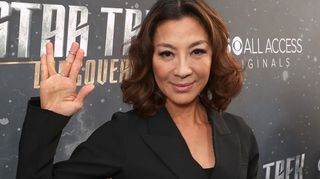 Michelle Yeoh came back with a vengeance in the latter half of "Discovery" Season 1, and now she'll have her own spin-off series.
(Image: © CBS)

The first episodes of "Star Trek: Picard" have aired and are now being scrutinized on social media and countless threads across the internet.

But let's not forget about Season 3 of "Star Trek: Discovery" and the new spin-off show, which may or may not officially be called "Section 31" — although that title does seem likely.

"It's 1,000 years in the future. [It's got] things you expect from 'Star Trek' — enemies might be allies, former allies might now be enemies. [But] everything's different. It's still the world of 'Star Trek,' no question about it, but there's a lot of huge changes in the universe," he said.

"And it's interesting because, as we cut it, it [still] feels very much like 'Discovery,' but the world is just so different … people will definitely have a minute of going, 'Wow, I need a minute to adjust to what this is.'"

Related: 'Star Trek: Discovery' Season 3: What we know and what we hope for

This approach will give Kurtzman a virtually blank canvas in terms of "Star Trek" lore and what he can do with it.

"There's no worry of canon at this point. We're not even anywhere close to where canon has been. Everything that happened … in the past has actually planted seeds that have led to outcomes in the future. And getting to see that over the spectrum of this amazing time jump is really what's fun about the season," Kurtzman said.

"The only restraints are making sure that we don't violate some Trek fundamentals. But because we're not having to sync up with canon, we really had a different kind of freedom this year."

Wilson Cruz, who plays Dr. Hugh Culber, confirmed that principle photography on "Discovery" was nearly finished when we spoke to him at the "Picard" premiere.

"We've been working very hard since the summer, and we're almost done," he said. "And I think it's going to be very exciting for people to see the world that we inhabit when we get there."

We asked how much time was left on principal photography, to which Cruz replied, "A few weeks."

So, are we looking at Season 3 of "Discovery" airing soon after "Picard" has completed its debut season? It's entirely possible, yes.

We also asked Kurtzman about the "Section 31" spin-off, starring Michelle Yeoh, to which he replied, "It's well on its way, I can tell you that. And Erika [Lippoldt] and Bo Yeon [Kim] have written a great script and we have a writers' room, and it's exciting."

We asked how far they were from casting, to which Kurtzman said, "I think that's going to be happening soon."

When we asked if it could be within, say, the next three months, he replied, "Could be. Could be."

Following the Hollywood premiere of "Picard," GWW has reported that filming is set to start in Mississauga, Canada, on May 4 of this year and will shoot for a total of seven months, with a completion date of November 2020. Apparently, production was pushed back to accommodate Michelle Yeoh's shooting schedule on the Marvel Studios film "Shang-Chi and the Legend of the Ten Rings."

To recap, in Season 1 of "Discovery," Michael Burnham (Sonequa Martin-Green) discovers that the Mirror Universe version of her former captain is her most Imperial Majesty, Mother of the Fatherland, Overlord of Vulcan, Dominus of Kronos, Regina Andor, Emperor Philippa Georgiou Augustus Iaponius Centarius, ruler of the xenophobic Terran Empire, which spans most of the known galaxy. When Burnham and the Discovery crew escape back to their reality, Emperor Georgiou is their prisoner, though she's soon released and recruited by Section 31, a supersecret Federation intelligence organization.

The Mirror Universe is an informal name for a parallel universe first visited by James T. Kirk and several officers from the USS Enterprise in 2267. This alternate reality coexists with the prime universe on another dimensional plane. The Mirror Universe was so named because many people and places seemed to be opposites of who they were in the prime universe, with numerous good aspects now evil and vice versa. (It is an entirely different alternate reality from the Kelvin timeline of the awful J.J. Abrams-produced "Star Trek" films.)

It was first introduced in the "Star Trek: The Original Series" episode "Mirror Mirror" (Season 2, Episode 4), when a transporter accident occurs, and Capt. Kirk (William Shatner) is beamed into this alternate reality, where the Federation is an evil entity called the Terran Empire.

The Mirror Universe was never explored in "The Next Generation" or "Voyager." However, "Deep Space Nine" featured an impressive five visits, and "Enterprise" made two memorable excursions. Here's a list of all the "Star Trek" episodes in which the Mirror Universe comes into play:

The vastly underrated "Enterprise," which takes place a century before both "The Original Series" and "Discovery," even had a special opening-credits sequence that showed much of Earth's Mirror Universe history.

Section 31 first appeared in "Deep Space Nine" in the episode "Inquisition" (Season 6, Episode 18). It's a clandestine organization that's supposed to protect the security of the United Federation of Planets. During the mid-23rd century, it was regarded as a critical division of Starfleet Intelligence. However, by the 24th century, it was considered to be a rogue organization and not part of the Federation; its very existence was a deeply buried secret, known only to a handful of people beyond its own membership.

Perhaps the darkest aspect of Section 31's nature was that, while it had existed since the beginning of Starfleet, it was a self-governing department. And, because it operated for over 200 years with no accountability or oversight whatsoever, it felt free to use its own discretion to kill those it deemed a threat to the Federation.

A spin-off series focusing on Section 31 will certainly take "Star Trek" in a new direction, and perhaps, finally, we're going to have the fully fleshed-out "Star Trek" universe we've all wanted for so long.