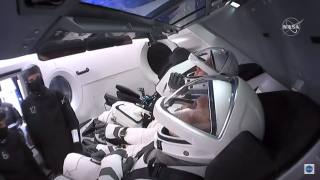 A small stuffed animal hitched a ride on the Demo-2 mission, strapped in next to NASA astronaut Bob Behnken on May 27, 2020.
(Image: © NASA TV)

We spotted some wild and wacky details leading up to SpaceX's now-delayed Demo-2 test flight today (May 27).

Today's mission scrubbed and was delayed for this Saturday at 3:22 p.m. EDT (1922 GMT). However, today's events, which served as a sort of "wet dress rehearsal" for the actual launch, had some interesting highlights. From the minute that veteran NASA astronauts Bob Behnken and Doug Hurley arrived this morning, ready to strap into their spacesuits and launch to the International Space Station, to the moment the launch was called off, today's events were chock-full of excitement.

During a preflight news conference Monday (May 26), it was revealed that no one knew yet what the astronauts would eat for breakfast before the launch. Since the earliest days of human spaceflight, the preflight breakfast has been a tradition, with the Apollo astronauts famously eating steak and eggs before lifting off.

The internet lit up with guesses as to what the astronauts would eat before launching and, starting out early in the morning on launch day, Hurley put this mystery to rest: "Steak and eggs. Question answered!" he tweeted.

Pop stardom and spaceflight collided on launch day as Grammy award-winning pop artist Kelly Clarkson sang the national anthem. Her gorgeous belt rang clear and true, even though she wasn't actually at NASA to sing. That's right, like many things right now, Clarkson's performance was conducted virtually through a live video broadcast.

Still, while she may not have been on-site for the launch, her voice was a perfect note to start the day off on.

Tesla to the launch pad

After breakfast and in their spacesuits, the pair of astronauts said goodbye to their families and hopped into a Tesla Model X, modified with NASA's iconic Worm logo. But, as many people noticed online, the logo, plastered across the back of the vehicle, wasn't the only space touch.

The vehicle's license plate read "ISSBND," or ISS (International Space Station) bound. The plate is a cheeky nod to the fact that the astronauts are set to launch from Florida to the space station.

Rock out with AC/DC

Now, this drive to the launch pad wasn't some silent, stoic drive. The astronauts had a perfectly curated playlist to amp them up as they rode to board Crew Dragon, which was placed high atop the Falcon 9 rocket.

According to SpaceX commentator Lauren Lyons during May 27 live launch coverage, the pair started their drive off with AC/DC's classic song "Back in Black." She shared that the reason they chose to start off their drive with this song is that "they are back," on launch pad 39A, which the astronauts haven't launched from since the end of NASA's space shuttle program in 2011.

Following the heavy metal tune, the pair listened to "the elevator music from the Blues Brothers film," Lyons shared, the song "The Girl from Ipanema," a Brazilian bossa nova standard written by Antônio Carlos Jobim and Vinícius de Moraes in 1962.

Rounding out their playlist, the astronauts blasted (it can only be assumed) the Star-Spangled Banner, "the army French horns version," Lyons said, adding that this is "for very obvious reasons," because astronauts both served in the U.S. military.

May I have your autograph?

Once at the launch pad, before strapping into Crew Dragon, the pair started a brand new tradition: They signed their names on the walls of the white room with a sharpie.

The white room, which was painted white and nicknamed as such during NASA's Gemini program, is the last place that the astronauts visit before entering the spacecraft for launch.

The fun didn't stop once the astronauts strapped into Crew Dragon. The capsule can fit up to four passengers but because this is the craft's first crewed test flight, only two astronauts will fly aboard this mission. However, if you looked close enough, you might've spotted a third crew member buckled into the capsule.

The astronauts brought along a small stuffed animal that appears to be a plush dinosaur (or maybe dragon? how fitting), which they buckled into one of the astronaut passenger seats. This fuzzy little astronaut isn't just for fun, however. Astronauts typically bring up items, like this plush dino, as a measure to show the effects of zero gravity to signify that the astronauts have reached space.