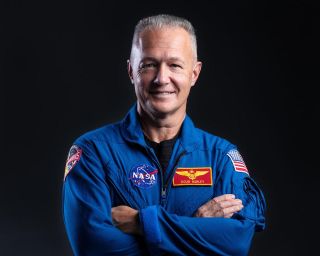 Doug Hurley is a NASA astronaut and retired U.S. Marine Corps Colonel. He's flown on two spaceflights and will make a third, historic spaceflight as commander on the Demo-2 flight of SpaceX's Crew Dragon spacecraft. He'll be accompanied by fellow NASA astronaut Robert "Bob" Behnken on the first crewed voyage of the spaceship.

After college, Hurley attended The Basic School at the Marine Corps Base in Quantico, Virginia, and then aviation school at the Naval Air Station in Pensacola, Florida. He began flight training in 1989 and became a naval aviator in August 1991.

Hurley served in the Navy as a fighter pilot, and trained to fly the F/A-18 Hornet, a supersonic jet. In 1997, he became a Navy test pilot, flying planes such as the F/A-18E/F Super Hornet aircraft — more advanced versions of the F/A-18 Hornet.

From fighter jets to space shuttles

NASA selected Hurley for the agency's astronaut program in 2000. After two years of training and several years in various support team roles, Hurley made his first spaceflight in July 2009, as the pilot for STS-127, International Space Station Assembly Mission 2J/A aboard the space shuttle Endeavor.

During the STS-127 mission, Hurley helped deliver two new components to the space station along with replacement parts, batteries, hardware and water. The mission required the work of 13 astronauts from all five international partners supporting the space station. In 16 days, the crewmembers completed five spacewalks and 248 orbits of Earth.

Related: How to become an astronaut

Hurley's second spaceflight was the STS-135/ULF7 mission aboard the space shuttle Atlantis in July 2011. The mission delivered supplies to the space station, tested a robotic refueling mechanism and returned a failed ammonia pump module for NASA to examine. The 13-day mission was NASA's final space shuttle mission.

With the space shuttle program at an end, NASA launched the Commercial Crew Program to promote the development of private spaceflight companies that the agency would commission to send astronauts into space. In 2015, NASA announced that Hurley would be joining the agency's first class of commercial crew astronauts.

Boeing's CST-100 Starliner and SpaceX's Crew Dragon are the first spacecraft commissioned by the U.S. government to send NASA astronauts into space. After years of development and testing, SpaceX plans to launch Hurley and Behnken on the first crewed flight of Crew Dragon on May 27, 2020, from the Kennedy Space Center in Florida.

From last-ever to first-ever

SpaceX successfully launched an uncrewed Crew Dragon capsule to the International Space Station on March 2, 2019, on a two-stage Falcon 9 rocket. The spacecraft then docked with the orbiting laboratory on March 3 and returned to Earth on March 8.

The six-day flight, dubbed Demo-1, carried a sensor-laden dummy astronaut named Ripley, which recorded a slew of information on what astronauts will experience while riding in the Crew Dragon capsule.

The Demo-2 flight will be the Crew Dragon's second flight — this time with astronauts Hurley and Behnken aboard. Demo-2 will be the first American astronaut crew launched from American soil since NASA's last space shuttle launch in 2011, Hurley's most recent flight.

"It's a real honor to just be a part of this program and to launch American rockets from Florida one more time," Hurley said on May 16, 2020, during a meeting of the National Space Council.

NASA and SpaceX will decide how long Hurley and Behnken will remain in orbit after Crew Dragon reaches space, but the mission is likely to last between one and four months. The mission's goal is to validate Crew Dragon and Falcon 9 for crewed flight, which will allow SpaceX to start flying operational missions to the ISS.

Judging by his recent interviews and social media posts, Hurley is excited for this pioneering mission.