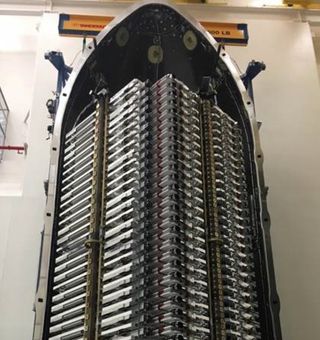 Sixty satellites for SpaceX's Starlink megaconstellation are stacked in their payload fairing ahead of a planned May 15, 2019, launch.
(Image: © SpaceX/Elon Musk via Twitter)

The company plans to launch 60 of its "Starlink" broadband satellites this week, likely on Wednesday (May 15), SpaceX founder and CEO Elon Musk announced via Twitter over the weekend.

All 60 spacecraft are crammed into the payload fairing of a single Falcon 9 rocket, which will lift off from Florida's Cape Canaveral Air Force Station. The launch window on Wednesday runs from 10:30 p.m. EDT to midnight EDT (0230 to 0400 GMT on May 16), according to Spaceflight Now.

Related: SpaceX's 1st Prototype Starlink Satellites Are Up and Running

You can watch the launch here at Space.com when the time comes, courtesy of SpaceX, or directly via the spaceflight company.

The five dozen satellites pretty much fill the cavernous fairing, as Musk showed in another tweet. He posted side-by-side photos of the Starlink craft in their fairing and his Tesla Roadster in its fairing in early 2018, before the car took flight on the first test mission of SpaceX's Falcon Heavy rocket. (The Falcon 9 and Falcon Heavy use fairings of the same size.)

Just two weeks after that February 2018 Falcon Heavy launch, a Falcon 9 sent the first two Starlink satellites skyward. But that duo, nicknamed Tintin-A and Tintin-B, were pathfinders; the 60 going up this week are "production-design" satellites, Musk said.

And many more will follow these pioneers, if all goes according to plan. SpaceX eventually aims to loft thousands of Starlink satellites, which will provide relatively cheap internet access to people around the world.

A minimum of six more 60-satellite launches will be required to provide "minor" Starlink coverage, while 12 more will boost the coverage to "moderate," Musk said in another tweet last weekend.

And SpaceX isn't the only company that wants to provide space-based internet; for example, OneWeb and Amazon are both planning megaconstellations of their own.