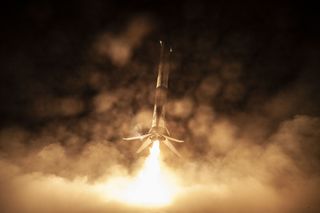 A SpaceX Falcon 9 booster lands on a drone ship after launching the company's first Crew Dragon capsule in March 2019. The same booster will launch 60 Starlink satellites from Pad 39A of the Kennedy Space Center in Cape Canaveral, Florida on April 23, 2020.
(Image: © SpaceX)

CAPE CANAVERAL, Fla. — SpaceX has fired up the rocket that will ferry the company's next batch of Starlink satellites into space.

That rocket is expected to launch 60 Starlink internet satellites into orbit no earlier than Thursday (April 23) from the historic  Launch Pad 39A at NASA's Kennedy Space Center here. On Friday (April 17), the company test-fired the first stage of Falcon 9 booster to ensure the rocket is ready for launch, the company said on Twitter.

The test, called a static fire, is a typical prelaunch test for SpaceX missions and sent smoke billowing from the 229-foot tall (70-meter) rocket as its nine Merlin 1D engines briefly ignited. The upcoming launch, called Starlink 6, will mark the fifth Starlink mission this year and the company's seventh batch of operational satellites — launched 60 at a time — since 2019.

The Starlink 6 mission's veteran Falcon 9 rocket rolled out of its hangar and went vertical on the launch pad in advance of the test-firing of its first-stage engines on Friday morning. During the test, teams loaded the Falcon’s super-chilled propellants — kerosene and liquid oxygen — into the rocket and then briefly ignited the first stage’s nine Merlin 1D engines.

The engines briefly fired at 12 p.m. EDT (1600 GMT), generating more than 1 million pounds of thrust while the booster remained firmly on the ground. Engineers reviewed the data before deciding to proceed with the Falcon 9’s planned launch attempt Thursday afternoon.

The rocket featured in the upcoming flight is a thrice-flown booster, having previously launched the Crew Dragon capsule on its first journey to the space station in 2019, a trio of Canadian Earth-observing satellites, and the fourth Starlink mission earlier this year.

The Starlink 6 launch will mark the fifth time a SpaceX booster will fly four times. The company's previous Starlink mission also featured a veteran booster. However, during that flight, one of the booster's nine engines cut out during its ascent. Falcon 9 is designed to handle this type of engine failure and deliver its payload safely to orbit. However, the booster was unable to successfully land on the drone ship.

This upcoming mission is also unique in that it's the second to feature another key piece of recycled hardware: the rocket's nose cone. Also called the payload fairing, the clam-shelled covering is designed to protect the payload as it rockets through the atmosphere. Once the craft is above Earth's atmosphere on its way to orbit, the two pieces are jettisoned and plummet back to Earth.

Historically, the fairings have been a "one-and-done" component; once they do their job, the pieces are discarded in the ocean, never to be seen again. But SpaceX aims to change that and save $6 million per flight by reusing even a single fairing.

To that end, the California-based rocket manufacturer has outfitted two boats with giant nets that act as mobile catcher's mitts. SpaceX has also outfitted each fairing with a parachute and onboard computer system that will steer it back to Earth and (hopefully) into the outstretched nets of the ships GO Ms. Tree and GO Ms. Chief. SpaceX has worked steadily to reuse as much of its Falcon 9 rockets as possible, and has made 50 first-stage landings in recent years.

While catching the falling fairings can be a challenge, SpaceX has also been scooping them out of the water and refurbishing them. Shrouding the stack of 60 Starlink satellites is the second set of payload fairings to be reused.

Starlink 6 is the first time SpaceX has used a fairing half that was caught in a net. For this flight, one half was caught by GO Ms. Tree and the other was scooped out of the ocean. It's also the third flight to feature recycled fairing pieces.

According to SpaceX, the fairing halves used in this flight were first flown on the AMOS-17 mission, which launched in 2019. The boats are expected to leave Port Canaveral a few days prior to launch, so they can be in position and ready to make another catch.