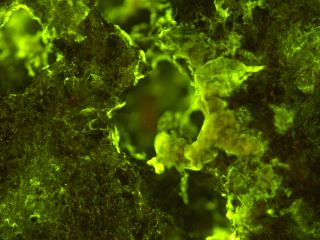 Sphingomonas desiccabilis, one of three microbes chosen for the BioRock experiment, seen growing on basalt. Run by a research team from the University of Edinburgh, BioRock tests how altered states of gravity affect biofilm formation on the International Space Station.
(Image: © UK Centre for Astrobiology/University of Edinburgh-Rosa Santomartino)

The next SpaceX mission to the International Space Station (ISS) may be uncrewed, but it could nonetheless eventually help humanity extend its footprint far beyond low Earth orbit.

The company's robotic Dragon cargo capsule is scheduled to launch toward the ISS atop a Falcon 9 rocket on July 21 from Cape Canaveral Air Force Station in Florida. In addition to food, water and other supplies, Dragon will be toting 2,500 lbs. (1,135 kilograms) of science gear, which will enable 47 separate experiments, NASA officials said.

A fair number of these payloads have a distinct space-settlement flavor. For example, the BioRocks experiment will investigate how microbes interact with rocks in a low-gravity environment, potentially paving the way for "biomining" on the moon and Mars. (Much mining here on Earth already employs microbial helpers.)

The experiment will "strengthen and continue the alliance between human civilization and the microbial world in establishing a permanent human presence in space," BioRocks principal investigator Charles Cockell, of the University of Edinburgh in Scotland, said yesterday (July 9) during a teleconference with reporters.

Meanwhile, the MVP Cell-02 experiment will culture bacteria aboard the ISS for 1,000 generations, which will take about three weeks if everything goes well. Project team members will later scour the microbes' genomes for spaceflight-induced changes — data that are generally lacking, as researchers have tended to focus on whole-body effects to date.

Gauging changes at the genetic level "will really help us understand how life responds to this environment, with direct implications for long-term exploration," said MVP Cell-02 principal investigator Craig Everroad, a scientist at NASA’s Ames Research Center in California. "Basically, how does evolution see this unique environment, and how does it act in response?"

Another investigation, called Space Tango-Induced Pluripotent Stem Cells, will culture brain cells from patients with multiple sclerosis and Parkinson's disease aboard the ISS. The goal is to understand how brain cells — both neurons and immune-system cells — grow and interact in the microgravity environment. Such information could help protect astronauts from neurodegenerative diseases during long space missions, NASA officials said.

Then there's Space Moss, which will assess how microgravity affects the development, growth and gene expression of these hardy little plants. The experiment could eventually aid future efforts to grow plants on the moon and Mars, project team members said, and help researchers bio-engineer more productive crops here on Earth.

Another experiment will attempt to fabricate human tissue using a 3D printer, and yet another will examine how microgravity affects healing and tissue regeneration. You can learn more about these and other science experiments going up on Dragon here.

Dragon will also carry another International Docking Adaptor (IDA) on the upcoming mission, which will be SpaceX's 18th cargo run to the ISS for NASA. IDAs are designed to allow a variety of spacecraft to dock to the orbiting lab — including the private American crew capsules that will soon start carrying NASA astronauts up and back, SpaceX's Crew Dragon and Boeing's CST-100 Starliner.