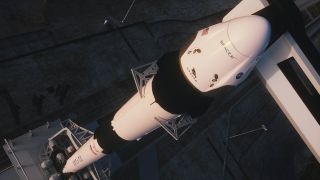 An illustration of a SpaceX Crew Dragon and its Falcon 9 rocket on Launch Pad 39A of NASA's Kennedy Space Center in Florida.
(Image: © SpaceX)

SpaceX's new astronaut taxi is ready to showcase its safety features in a critical flight test tomorrow (Jan. 18) that will help pave the way for the vehicle's first crewed flight.

The launch window for the uncrewed IFA runs from 8 a.m. to noon EST (1300 to 1700 GMT), though it may be extended to accommodate uncooperative weather; you can watch it live here at Space.com, courtesy of NASA.

If all goes according to plan, Crew Dragon's emergency-abort system will be triggered 84 seconds after liftoff, when the rocket-capsule combo is about 2.5 miles (4 kilometers) downrange from KSC and 12 miles (19 km) high in the sky, Benji Reed, SpaceX's director of crew mission management, said during a news conference today (Jan. 17).

That abort system is powered by eight SuperDraco thrusters, which will fire for about 8 seconds. This will blast Crew Dragon clear of the Falcon 9, demonstrating the capsule's ability to keep astronauts safe if a problem arises during launch.

Crew Dragon will jet away from its rocket ride at about 2.3 times the speed of sound, Reed said, reaching a maximum altitude of about 25 miles (40 km). The capsule will then reorient itself for descent, deploying its parachutes about f5 minutes into the flight. About 5 minutes after that, Crew Dragon will splash down in the Atlantic Ocean, likely 19 to 22 miles (30 to 35 km) off the Florida coast.

A recovery ship will be waiting to scoop Crew Dragon out of the sea, setting the stage for a detailed analysis of the data collected during the flight, including information gathered by sensors affixed to two mannequins that will be riding aboard the capsule. This particular Crew Dragon may eventually be refurbished for additional flights in the future, depending on how tomorrow's test goes, Reed said.

The Falcon 9 won't be so lucky, however. The two-stage rocket won't survive the IFA, and onlookers might even get a glimpse of its fiery demise if conditions are right.

"We expect there to be some sort of ignition, and probably a fireball of some kind," Reed said. "Whether I would call it an explosion that you would see from the ground, I don't know; we'll have to see what actually happens. But I wouldn't be surprised, and that wouldn't be a bad outcome if that's what we saw."

It will be an honorable death for a very accomplished booster. This Falcon 9's first stage — the first of the latest-iteration "Block 5" variants ever to fly — already has three successful missions under its belt, Reed said.

SpaceX has been developing Crew Dragon under a series of contracts with NASA's Commercial Crew Program (CCP), which is looking to the private sector to bring an orbital human-spaceflight capability back to American soil. The United States has been dependent on Russian Soyuz spacecraft to get its astronauts to and from the International Space Station (ISS) since the space shuttle fleet retired in 2011.

Crew Dragon has notched a number of significant milestones on the path to contracted, operational flights, including a landmark uncrewed mission to the ISS last March called Demo-1. The IFA is the last such big-ticket item to accomplish before Crew Dragon first carries astronauts. That first crewed flight, a test mission known as Demo-2, will tote NASA astronauts Bob Behnken and Doug Hurley to and from the ISS, perhaps sometime this year.

"We've got work to do, but honestly, getting this test behind us is a huge milestone," Kathy Lueders, NASA's CCP manager, said during today's news conference.

The CCP has also contracted with Boeing, which is building a capsule of its own called the CST-100 Starliner. Starliner flew its version of Demo-1, the uncrewed Orbital Test Flight (OFT), last month, but things didn't go according to plan. The capsule suffered a problem with its mission timer shortly after liftoff and got stranded in an orbit too low to allow an ISS rendezvous. Starliner ended up circling Earth on its own for two days but did manage to ace its touchdown on Dec. 22.

It's unclear what the next steps will be for Starliner; NASA is still assessing whether to require another version of OFT before Boeing can start gearing up for a crewed test flight, agency chief Jim Bridenstine said recently.

If bad weather prevents the Crew Dragon IFA from happening tomorrow, backup opportunities are available on both Sunday (Jan. 19) and Monday (Jan. 20) during the same time window (8 to noon EST).