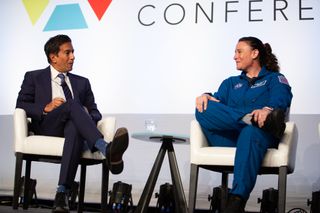 When it comes to making house calls, Dr. Serena Auñón-Chancellor is out of this world. A medical doctor-turned-astronaut, Auñón-Chancellor spent 197 days in space on board the International Space Station (ISS) last year, performing research on various scientific experiments.

The ISS is and has been home to a large array of experiments made in its unique microgravity environment. But these experiments are not just about moving explorers farther away from Earth. Much of the research centers on improving life on our home planet.

"We're not just a self-licking ice cream cone," Auñón-Chancellor told a crowd at this year's annual International Space Station Research and Development Conference (ISSRDC) in Atlanta, Georgia. "The majority of health and life science we're doing on the ISS helps back on Earth."

She pointed to space station studies on cancer drugs. In microgravity, the hard-to-grow cells can grow in a three-dimensional manner that resembles how they form in the body, rather than growing flat in a culture plate. As a result, cells growing in space live longer, giving researchers more time to study and test them.

Back on Earth, Auñón-Chancellor continues to practice medicine in underprivileged areas. Along with her background, her interactions with patients have given the health-related experiments she performed a special place in her heart.

"For me, I just loved doing medical research," Auñón-Chancellor told Space.com. "It was easy to see how it applied to my patients."

That same love brought a special challenge to her visit to space. "I missed practicing medicine," she said. "I enjoy seeing patients on a daily basis."

Once back on the ground, however, she found that her space voyage piqued the curiosity of many patients she served before becoming an astronaut. After landing in her Soyuz spacecraft last December, she learned that many of her patients followed her space exploits online and followed her and the ISS on Twitter. "I was able to bring in a population that maybe wouldn't have followed the ISS otherwise," she said.

"We did our part on the ISS"

Auñón-Chancellor's interest in space started when she was young. With three sisters in the house, she often found herself commandeering a smaller television in her parents' bedroom to tune in to space shuttle launches. Her father noticed her interest and told her that if she wanted to work for NASA, she needed to follow an engineering route. She received a bachelor's degree in electrical engineering, then went on to get her medical degree. Along the way, she learned about the field of aerospace medicine and began to pursue internships. "Doors just began to open from that point on," she said.

In 2006, Auñón-Chancellor came to Johnson Space Center as a flight surgeon. She spent almost a year in Russia supporting medical operations for the ISS crewmembers, then served as deputy crew surgeon for space shuttle mission STS-127. In 2009, she was selected as an astronaut candidate, graduating from astronaut training two years later. She flew into space as part of Expeditions 56 and 57, from June 6 to Dec. 19, 2018.

As a flight surgeon, she had been well aware of the changes that happen to the body, including effects on the eyes and back; and the bone and tissue loss that come with spending time in space. But the most startling effect for her came in the middle of the third-stage cutoff of the rocket.

"I felt like my world tilted by 45 degrees," Auñón-Chancellor said on stage at ISSRDC. "Something that was perceiving position sense in my brain changed abruptly." As a result, objects like the control panel inside the Soyuz MS-09 spacecraft seemed more distant than they actually were. "It took about 2 hours for that feeling to go away," she said.

"I like to know what the results are of some of these experiments so we can find out what our research showed," she said. And many of them have done well. "They have borne fruit."

When it comes to the ISS, Auñón-Chancellor feels as though it's a valuable place to perform science, especially medical science.

"Most of the science we do up there is aimed at the people down here," she said.

What she would really like to see is more cancer research performed aboard the ISS.

"Cancer really is the 'emperor of all maladies,'" Auñón-Chancellor told Space.com. "It's a battle that's being waged on all fronts, including the ISS."

"I wish I saw more of that research," she said.

Auñón-Chancellor described how, one day, she would love to tell her family and friends that cancer is no longer an issue.

"I'd like to say, we did our part on the International Space Station," she said.

Although much of the science on the ISS helps people on Earth, some of it is aimed at sending astronauts to the moon and Mars. Auñón-Chancellor thinks that medical research for space travelers will become more individualized.

"I'm hoping that by the time we send folks off to Mars, we're going to have a better and more precise idea of how each one of those crewmembers responds to medication, responds to a radiation environment, responds to a microgravity environment, to make sure we're prepared to support them as an individual the best way possible," she said.

That kind of precision has been happening in medicine for the last decade, she said. Surgeons often perform blood tests before surgery to determine which pain medications the patient will best respond to. "A lot of this stuff is not new," she said.

As space tourism becomes a growing industry, that sort of precision medicine can improve the reach of private medicine. Tourists will most likely need to undergo thorough medical examinations to ensure they are able to withstand the rigors of space.

"People will have to have a certain level of health before they go up," Auñón-Chancellor said. "You can't send just anybody up there."

That kind of monitoring will improve medical knowledge around the world. And that's important, because Auñón-Chancellor says that space travel will be about more than just exploration.

"It really does allow us to continue the science," she said. "We're performing such groundbreaking research that we can't just stop."