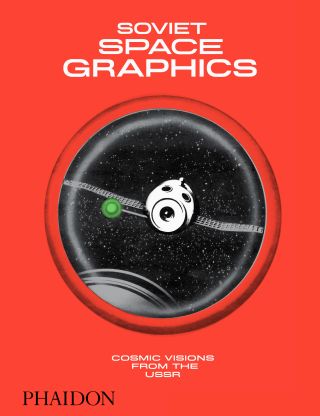 "Soviet Space Graphics: Cosmic Visions from the USSR," (Phaidon, 2020), released April 1, is an incredible collection of images from the USSR.
(Image: © Phaidon)

One new book transports readers back to the early days of Soviet spaceflight with an unbelievable collection of stunning, colorful and nostalgic images.

"Soviet Space Graphics: Cosmic Visions from the USSR," (Phaidon, 2020), released April 1, is a masterful compendium of images showcasing space design ideas from the then Soviet Union from the 1920s through the 1980s. It highlights the beauty of early space design in imaginative, colorful artworks.

This book is a collaboration between the Moscow Design Museum and author Alexandra Sankova, who is both a graphic designer and a founder of the museum. " I grew up in the Soviet Union and dreamed of becoming cosmonauts as many boys and girls did," Sankova told Space.com in an email, adding that, during this time period in the Soviet Union the cosmonauts, and even the first dogs to fly to space, were some of the most adored and revered figures.

"Soviet Space Graphics: Cosmic Visions from the USSR," (Phaidon, 2020) showcases a number of incredible images from the Soviet side of the space race. View Deal

"The theme of space penetrated into every apartment, and I don't mean only magazine covers. Belka and Strelka — who were the first animals to successfully complete an orbital flight and return to the Earth alive — obtained status of the Soviet Union's most famous dogs," Sankova said.

The cover of "Soviet Space Graphics: Cosmic Visions from the USSR."

Technology for the Youth, issue 11, 1958, illustration by G. Pokrovsky for the article ‘Lunar Landing’, depicting a spaceship taking off from the surface of the Moon, leaving behind a trail of incandescent gases and fire-red dust. (pages 26-27)

Radio, issue 6, 1956, illustration by N. Grishin, for the article ‘Television of the Future’, which discusses the potential for communications satellites to transform television. (page 23)

Technology for the Youth, issue 4, 1961, illustration by G. Pokrovsky for the article ‘Steps to the Stars’, depicting a spacecraft passing over Mars. A system of intricate inflatable structures is attached to the tail of the craft, comprising a mirror for photography, a telescope, a radio relay antenna and a solar power plant. (page 54)

Knowledge is Power, issue 2, 1954, illustration by K. Artseulov for the article ‘Five Days in a Hot Air Balloon’, which explores the possibilities of long-distance flights using hot-air balloons. (page 92)

Knowledge is Power, issue 2, 1949, illustration by K. Artseulov for an interview with Vasily Romanyuk, the first person to complete a parachute jump from the Earth’s stratosphere, at a height of 13,000 metres (42,650 feet). (page 91)

Technology for the Youth, issue 10, 1965, illustration by Alexei Leonov for the article ‘The First Space Dawn Artist Provides Us With His Drawings’, depicting the Sun rising over Earth. Leonov was the first human to ‘walk’ in space during the 1965 Voskhod 2 mission. (page 68-69)

Technology for the Youth, issue 1, 1964, illustration by S. Lefterev for the article ‘Morning in the “Astrocity”’, depicting a futuristic scenario of space transportation within a cosmodrome. (page 158-159)

Technology for the Youth, issue 2, 1959, illustration by B. Dashkov for the article ‘What Would a Space Station on the Moon Look Like?’ (page 173)

Technology for the Youth, issue 4, 1956, illustration by A. Pobedinsky for the article ‘Brain Emits Stars on the Oscilloscope Screen’, which speculates on the existence of telepathy, and whether the human brain emits  elecromagnetic waves and signals. (page 151)

Young Technician, issue 10, 1964, illustration by R. Avotin for the article ‘Space Greenhouse’, which hypothesizes on the creation of an environment suitable for growing plants in space. (page 226)

Young Technician, issue 8, 1979, illustration by R. Avotin in celebration of the graduating class from a young bionics enthusiasts club. The cover line reads: ‘Nature gave wings not only to birds. May bug, dragonfly, butterfly … how do they fly? Maybe by unravelling this mystery, designers will be able to create the perfect aircraft.’ (page 201)

Technology for the Youth, issue 8, 1976, ‘Echo of the Future’, illustrations by E. Bukreev depicting futuristic scenarios in Siberia. The artworks were submitted for the drawing competition ‘Siberia Tomorrow’. (page 190-191)

Knowledge is Power, issue 5, 1940, illustration by L. Epple for Boris Anibel’s science-fiction novel Sailors of the Universe, about a mission to Mars. (page 196)

Technology for the Youth, issue 5, 1969, ‘Oh, that Mysterious Moon!’, illustration by R. Avotin for an article that presents photographs from the Luna 9 unmanned space mission. (page 209)

Now, given the large span of time that this collection draws from, the team had to be very selective with the images they chose to include. "The selection of visual material took quite a lot of time," Sankova said. They chose from a massive variety of materials including posters, postcards, magazines and books from those decades.

She noted that images from magazines have long been overlooked by art historians because they printed and distributed the magazines to all Soviet citizens and the images were therefore very common. However, "many of these works are masterpieces of graphic design."

But the pieces they ended up choosing are incredible not just for their visual beauty but the design and inspiration behind them as well as many of the artists who contributed to the magazines they drew from were also experts in technology and science fields. "For example, the author of the "Technology for the Youth" cover (page 153) Vladimir Aryamov was the chief designer of the All-Union Scientific Research Automotive Institute, the author of numerous concept cars that were much ahead of their time. Later he worked at the All-Union Scientific Research Institute of Technical Aesthetics — the leading organization for industrial design in the USSR," Sankova said.

Some of Sankova's favorite images included in the book are by both cosmonaut Alexei Leonov, the world's first spacewalker and a science-fiction artist. In addition to being a groundbreaking cosmonaut as the first person to ever conduct a spacewalk, Leonov was also a talented painter. "The vivid, spectacular and authentic works created "first hand" painted an image of the cosmos as a romantic, friendly space in the minds of many Soviet citizens," Sankova said.

While these images are stunning and diving into the history of Soviet spaceflight is very interesting on its own, Sankova points out that "it is fascinating to compare American and Soviet graphics, as space programs were carried out simultaneously."

"The space race influenced everything — from innovations to design of newspapers, magazines, and posters in both countries. NASA imagery is awesome and impressive! I dream of creating an exhibition where the works of Soviet illustrators and designers will be displayed alongside with the works of their American colleagues," Sankova said.

If you are familiar with art and pieces of pop culture from the U.S. during the space race you might see familiar styles or imagery. From fantastical, imaginative technology ideas to glamorized visions of space tourism and exploration, it is interesting to see the similarities and also the differences between art from different parts of the world during the space race.