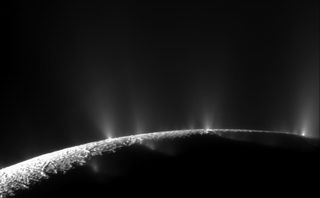 The plumes of the Saturn moon Enceladus, captured spewing from the moon's surface by NASA's Cassini spacecraft from a distance of 9,000 miles (14,000 kilometers) in 2010. One new study suggests that Enceladus' geysers act like a "snow-cannon" and makes Saturn's inner moons more reflective.
(Image: © NASA/JPL-Caltech)

Enceladus seems to be acting like a "snow-cannon," pumping water into Saturn's orbit and covering its neighboring moons in snow, which has made them highly reflective, new research suggests.

NASA's Cassini spacecraft spent over a decade studying Saturn. The probe collected incredible images and data about the planet and its system, including the planet's rings and moons. A team of researchers, led by planetary scientist Alice Le Gall of LATMOS-UVSQ, Paris, analyzed 60 radar observations of Saturn's inner moons — Mimas, Enceladus and Tethys — that Cassini made, and they found that the radar brightness of these moons is greater than previously suggested by a factor of two.

First, and perhaps strangest of all, the team thinks that Enceladus is likely home to a "snow-cannon," according to a statement. Rather than a shocking, sci-fi technology, this "cannon" is actually the geysers that have been discovered on the moon's surface. Enceladus is an icy moon famous for its massive ocean and geysers, which blast material into space. The geysers spout mostly water vapor, thought to come from the moon's salty global ocean. But what happens to this spouted material next is what makes these eruptions essentially a "snow-cannon," according to this research.

This research suggests that these geysers spout material into Saturn's orbit. The material then falls back down onto Enceladus and onto Mimas and Tethys, all three of which aren't protected by atmospheres. On Enceladus, it would fall back as water-ice particles; on Mimas and Tethys, it would precipitate as snow, they suggest. This snow and water ice would make the moons more reflective and help to explain the observations made by Cassini which showed these ultrabright objects.

Second, the researchers suggest that this "snow-cannon" effect isn't enough to account for the brightness they observed. They think that there are also likely "boomerang structures," or reflective structures that light and radar waves bounce off, buried underneath the icy surfaces of these three moons. They suggest that, in addition to reflecting light, these structures would reflect signals to spacecraft observing the moons.

"The super-bright radar signals that we observe require a snow cover that is at least a few tens of centimetres thick," Le Gall said in the statement. "However, the composition alone cannot explain the extremely bright levels recorded. Radar waves can penetrate transparent ice down to [a] few meters and therefore have more opportunities to bounce off buried structures. The sub-surfaces of Saturn’s inner moons must contain highly efficient retro-reflectors that preferentially backscatter radar waves towards their source."

Diving into the data

Exactly what these structures might be or be made of remains a mystery. But the team members behind this research have developed models that they will use to test whether specifically shaped "boomerang structures" might be effectively reflecting on these moons, or if, perhaps, fractures in their surfaces are collectively enhancing reflectivity.

"So far, we don't have a definitive answer," Le Gall said. "However, understanding these radar measurements better will give us a clearer picture of the evolution of these moons and their interaction with Saturn's unique ring environment. This work could also be useful for future missions to land on the moons."

This work used the full database of data obtained by Cassini from 2004 to 2017. The results of this research will be presented by Le Gall at the 2019 EPSC-DPS Joint Meeting, which takes place Sept. 15-20 in Geneva.