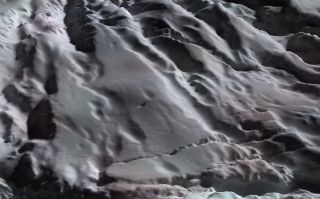 It's snowing on one of Saturn's moons. New high-resolution maps of Enceladus, the sixth-largest moon of the giant ringed planet, confirm that wintry conditions prevail on the icy body.

In fact, the superfine ice crystals that coat the surface of Enceladus would make for ideal skiing, said Paul Schenk of the Lunar and Planetary Institute in Houston, who took part in the study. That is, if there is enough snow on the moon's slopes to begin with.

In a new study of Saturn's icy moon, researchers found that "snow" falls on Enceladus, but at an extremely slow and steady pace by Earth standards — less than a thousandth of a millimeter per year. To build up roughly 320 feet (100 meters) of the stuff would require a few tens of millions of years or so, the scientists said. [Photos: The Rings and Moons of Saturn]

NASA's Cassini probe, in orbit around Saturn, made global maps of Enceladus and measured its surface layer thicknesses. The spacecraft found that ice particles ejected by geysers on the moon fall back onto Enceladus' surface in a predictable pattern.

By mapping these deposits, researchers discovered that active icy plumes likely last tens of millions of years or more on the surface of Enceladus, and blanket the frigid body in a thick layer of tiny ice particles.

"The discovery by instruments aboard the Cassini orbiter that there's a currently active plume of icy dust and vapor from Enceladus has revolutionized planetary science," Schenk said in a statement. "Earlier this year, we published work that showed material from Enceladus's plumes coats the surfaces of Saturn's icy moons. Now we've uncovered two lines of evidence that point to thick deposits of plume material coating the surface of Enceladus itself."

A separate team of researchers previously made models of Enceladus' plumes and found that some of the ejected particles fall back onto the moon in a distinct pattern. These results were published in 2010, and predicted that the heaviest buildup of icy particles is likely along two lines on opposite sides of the moon.

Schenk and his colleagues created global color maps of Enceladus that confirmed particle accumulation in these regions, which fell in line with the earlier predictions. The mapmaking work provided incentive for the researchers to hunt for physical evidence of this ejected particle buildup on the surface of Enceladus.

The scientists scrutinized the highest resolution images of areas near plume-formation sites. They found that the regions featured unusually smooth terrain against an undulating topography, which suggested that older fractures and craters on the surface were being covered up. [Surprising Geyser in Space: Cold Faithful on Enceladus]

Schenk and his colleagues also found changes in slope along the rims of most of Enceladus' deeper fractures, including a large canyon about 4,920 feet (1,500 meters) wide and 1,650 feet (500 m) deep. In this chasm, the breaks in slope were about 246 feet (75 m) to 410 feet (125 m) below the rims of the canyon walls, roughly matching the point at which different, more crustal material is exposed partway down the canyon walls.

The researchers determined that the appearance of these various surface features is best explained by a layer of looser material lying on top of more solid crustal ices. This top layer is thought to be the accumulated deposits from Enceladus' plumes, the researchers said, which form a snowy blanket across the moon's surface.

Schenk and his colleagues found that the layer of plume deposits is approximately 350 feet (107 m) deep in this area. The researchers also found three other sites that exhibit similar topography, but were unable to measure the thickness of the accumulated plume deposits because the image resolutions were not as sharp.

A slow and steady snowfall

But on the moon's surface, Enceladus could make for an ideal cosmic ski resort, according to the researchers.

"Bulky space suits and extremely low gravity aside (the surface gravity there is only about 1 percent that of Earth's), the particles themselves are only a fraction of a millimeter in size, roughly a micron or two across, even finer than talcum powder," Schenk said. "This would make for the finest powder a skier could hope for."

Researchers hope to expand upon this work once new high-resolution images are obtained during Cassini's future encounters with Enceladus, which are planned for 2012 and 2015 during the spacecraft's extended mission.