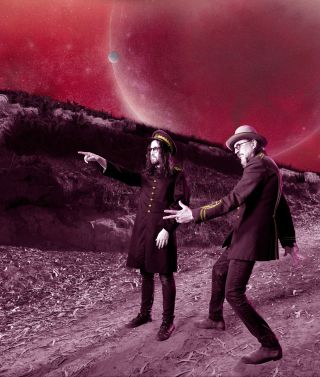 The musical force known as "The Claypool Lennon Delirium" (CLD) has awoken from its slumber once again to take listeners on a journey through space, time and humor, aptly titled "South of Reality." This new record, the third for the band, takes inspiration from an eccentric Jet Propulsion Laboratory rocket scientist and a cosmic event;  moonwalker Buzz Aldrin's "Monolith of Phobos" theme drove their 2016 debut record of the same name.

The pilots of the band are Les Claypool, best known as the amazing bass player and vocalist of multi-platinum selling band Primus, and guitar player/vocalist Sean Ono Lennon, formerly of The Ghost of a Saber Tooth Tiger and The Plastic Ono Band. Sean talked to Space.com about how the band formed and their debut record in a 2016 Q&A. We also revisited the band when they released an EP of cover songs called "Lime and Limpid Green" in 2017.

You can also find the CLD song "There's No Underwear in Space" as the soundtrack for a Space.com video that highlights a stunning view of the Eta Carinae star system — watch below:

In an interview with Jonathan Clark of New York radio station Q104.3, Lennon called CLD's sound "progedelic," a combination of progressive and psychedelic music. You'll learn that it's a spot-on description as you weave through "trippy" sounds and melodic jams delivered on a number of the new record's songs, including "Amethyst Realm" and the extraterrestrial adventure of "Boriska."

The musical mindmeld of Claypool and Lennon has given birth to humor, as well. "Toadyman" and part two of "Cricket Chronicles Revisited: Part I, Ask Your Doctor - Part II, Psyde Effects" will have you in tears if you're of the same comical persuasion.

Once again, Sean Ono Lennon has accepted Space.com's request to peer into his cosmic thoughts. We start from the gravity well where the physical recordings of "South of Reality" are currently bound and then hypothetically venture out to where radio waves carry its sound onward.

Space.com: On the new record, you have reached into the space and science grab bag again to deliver tales through CLD's unique psychedelic lens. The first single from the record, "Blood And Rockets: Movement I, Saga Of Jack Parsons - Movement II, Too The Moon," tells the story of a Jet Propulsion Laboratory rocket scientist. What inspired you to tell his fantastic journey?

Sean Ono Lennon: There's a biography of Jack Parsons, called "Sex and Rockets" by JW Carter, that was given to me by movie producer Don Murphy. Parsons led a fantastical life that somehow combined occult magic and rocket science. It's a story that should be made into a film or rock opera. It seemed like perfect subject matter for a Delirium tune.

Space.com: The experience of witnessing a solar eclipse is infused into the song "South of Reality." The human fascination with, as you put it, "waiting for the moon to shield the sun," is truly amazing to see — here at Space.com we see incredible interest from our readers before and during eclipses. Have you ever experienced a solar or lunar eclipse live? And with the media's injection of the supermoon phenomena into the human psyche over the last decade or so, do "super blood moon" lunar eclipses get the creative juices flowing?

Lennon: I've seen a few lunar eclipses but have never been in the path of totality for a solar eclipse. I made a cereal box viewer for the last one but it was only partial from my view. In fact the song "South of Reality" is about when Les went to see the solar eclipse with his dad but was just south of totality so didn't actually see it. That turned into a metaphor for feeling like you're in the wrong universe at the wrong time, a post-Trumpian dystopia.

Space.com: You've revealed your fascination and knowledge of space and science through music and also with appearances on the Nat Geo series "Star Talk." If you don't mind, we'd love to peer into your mind a bit for some sci-fi hypotheticals:

Our audience gravitates toward mysterious cosmic phenomena, including black holes. If the technology existed to safely float outside a singularity, what do you think would you see?

Lennon: Well, even if you mean at the border of the event horizon, where all the Hawking radiation would be, I guess you'd see a glowing orb, inside of which would be something primordial where you couldn't "see" anything. If you're talking about the center of a black hole it's not just light that can't travel, but even time stops, so nothing "happens" anymore. Given that every physicist I know of says "we don't know" what is in a singularity, I'll say I don't know either. But even if we have a magic ship that can hover on the perimeter of a black hole, we still won't "see" what's inside, as all information is lost, but we will see the glow of Hawking radiation, I guess. But I don't know. Maybe you'd see all this spaghettified matter from things being drawn of the event horizon, so there may be strings of planets and suns being consumed by this big glowing orb. I have no idea.

Space.com: If you could create a wormhole with the combined frequencies of Les' signature bass twang and your amazing guitar-shredding in jams like that at end of the album's opening number "Little Fishes," where in the universe would you take us?

Lennon: Well, that's an interesting question because even when people talk about theoretically traveling through a stable wormhole, I don't really understand how one would know where or when you'd come out on the other side. It seems like even the best scenario could throw you into a terrible part of our universe, a terrible time in our universe, or maybe even into another parallel universe. It just seems a bit dangerous even though theoretical. If we could use our dueling guitar magic to actually choose anywhere in the universe to go, and we could somehow control the outcome — and guarantee a safe return — I think I'd choose Alpha Centauri, since if we found any aliens there at least there would be a chance of establishing some kind of local interstellar relationship, (because it's our closest neighboring star system, though I'm sure your readers know that).

Space.com: The new record is certainly a trip — thanks for taking us into the CLD realm once again!