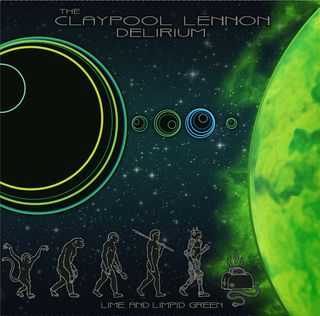 The Claypool Lennon Delirium have released a new EP of cover songs called "Lime And Limpid Green." It includes Pink Floyd's "Astronomy Domine," The Who's "Boris The Spider" and King Crimson's "The Court Of The Crimson King."

Primus front man and bass player extraordinaire Les Claypool and Ghost of a Saber Tooth Tiger guitarist/vocalist Sean Ono Lennon started writing together in late 2015, and their first release, "Monolith of Phobos," came out in June 2016.

The record delved into moonwalker Buzz Aldrin's comments about a strange "structure" on the Martian moon. Also, the title for an instrumental piece on the record is "There's No Underwear in Space," which is inspired by the late actress Carrie Fisher's notorious conversation with Star Wars writer/director George Lucas.

Space.com talked with Lennon about these songs in a July 2016 Q&A and featured the song "There's No Underwear in Space" on a video journey to the Eta Carinae Star System.

In late June 2017, the Claypool Lennon Delirium released a new animated video for the fourth song on the new record, called "Satori," written by Hideki Ishima of Flower Travellin' Band. The word satori originated in Japan and the Oxford English Dictionary defines it as "sudden enlightenment: the road that leads to satori."

"Lime and Limpid Green" is available on Amazon and wherever else records are sold. More info on The Claypool Lennon Delirium can be found on the band's site.