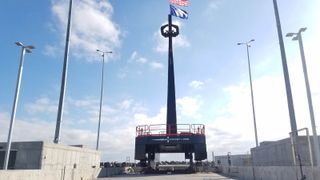 WALLOPS ISLAND, Va. — Rocket Lab officially opened its new U.S. launch site for business today (Dec. 12) and the U.S. Air Force will be the first to fly from the new complex.

Called Launch Complex 2, or LC-2, the new launch site for Rocket Lab's Electron booster is a seaside pad here at the Mid-Atlantic Regional Spaceport. The facility is the located at NASA's Wallops Flight Facility and is the first U.S. launch site for Rocket Lab, which has flown 10 missions so far from its Launch Complex 1 on the Mahia Penninsula of New Zealand's North Island. Six of those flights launched in 2019.

"For the company, it's huge having another launch site," Beck told Space.com after a ribbon cutting ceremony at LC-2. "Having two launch sites is great, but having one in the United States that can service all the government customers, and service national security needs, is really massive for us."

Rocket Lab aims to launch up to 12 missions a year from LC-2, about one a month, once flights begin in 2020. The first mission will launch in spring 2020 to deliver the U.S. Air Force's Space Test Program 27RM (STP-27RM) mission into orbit. That mission will launch a microsatellite called Monolith to see if small satellites can effectively carry "large aperture" space weather payloads, said Lt. Col. Meagan Thrush, program element monitor for space launch and control for the Air Force, in a news conference here today.

"Rocket Lab's launch site at the Mid-Atlantic Regional Spaceport on Wallops Island, Virginia, strengthens the United States' ability to provide responsive and reliable access to space," Col. Robert Bongiovi, director of the Air Force Space and Missile Systems Center's Launch Enterprise, said in a statement. "We look forward to Rocket Lab successfully launching the STP-27RM mission from Launch Complex 2 next spring, which will test new capabilities that we will need in the future."

The Mid-Atlantic Regional Spaceport is overseen by the Virginia Commercial Spaceflight Authority and is home to Pad 0A, Pad 0B and now Rocket Lab's LC-2. Northrop Grumman currently uses Pad 0A to launch its Antares rocket and Cygnus cargo ship to deliver NASA cargo to the International Space Station.

Rocket Lab's LC-2 is located near Pad 0A and consists of a 66-ton launch platform and a 44-foot-tall (13.4 meters) strongback, which will be used to raise Electron rockets vertical into flight position. The Electron rocket, meanwhile, is a 57-foot (17 m) booster designed to fly small satellites of up to 500 lbs. (225 kilograms) into orbit for $5 million per launch.

LC-2 includes facilities to hold at least four Electron rockets at a time, and a rocket integration building where Electrons will be assembled. Having multiple rockets on hand will allow Rocket Lab to have boosters ready for fast-response missions, if needed, said Shaun D'Mello, Rocket Lab's vice president of launch.

From start to finish, it took Rocket Lab, the Mid-Atlantic Regional Spaceport and Wallops officials 10 months to build LC-2. Rocket Lab held a groundbreaking ceremony in October 2018 and began pad construction in February of this year.

Today's grand opening was filled with ceremony, including a trumpet rendition of the U.S. national anthem by Rocket Lab engineer Nick Counts as the LC-2 strongback raised into launch position. And no grand opening would be complete with out a giant pair of scissors to cut a ribbon.

Jokes aside, it's been a busy year for Rocket Lab. The company launched six commercial missions in 2019, unveiled its new Photon spacecraft for deep-space flights and began testing technology to return Electron boosters to Earth for eventual reuse.

That reusability test occurred just last week, when Rocket Lab launched seven small satellites and then tested guidance systems and thrusters to safely guide an Electron first stage back through the atmosphere. Eventually, Rocket Lab aims to equip Electron boosters with parachutes and snatch them in mid-air with a helicopter after a launch.

"It went super well," Beck said of last week's test. "We were able to maintain control authority of the stage right through the reentry corridor. We brought that sucker right back in and had it in the ocean in good health."