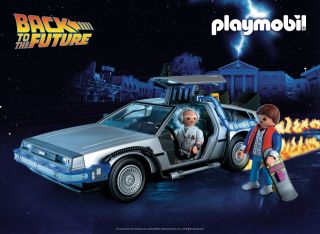 Playmobil will go back in time in May 2020 with three new sets from the "Back to the Future" film franchise.
(Image: © Future)

NEW YORK — Great Scott! Dust off your DeLoreans, sci-fi fans because Playmobil will launch three new sets from the "Back to the Future" films in 2020 that will have you channeling your inner Marty McFly.

Playmobil, which released a full line of Mars exploration sets this year, will follow it up with a line of Back to the Future sets that feature the iconic time-traveling DeLorean and characters from the 1985 science fiction film (and its two sequels). The toy company unveiled the new Playmobil sets last week here at New York Comic Con.

The new Playmobil playsets will include a hero set with the Delorean, 1985 Marty McFly and Doc Brown, as well as Doc's dog Einstein and their accessories. The line will also include a two-pack featuring the figures of 1955 Doc Brown and Marty.

Finally, a set of collectible 6-inch Doc Brown and Marty characters will round out the sets. Playmobil has not release prices yet for the new sets, but they will be available in May 2020.

Here's a look at the new sets as seen at Playmobil's NYCC booth.

Collectible 6-Inch Back to the Future Figures

Playmobil's Back to the Future line follows the company's "Ghostbusters" line, another 1980s franchise. The company unveiled a set of new collectible 6-inch Ghostbusters figures for 2020 at NYCC.