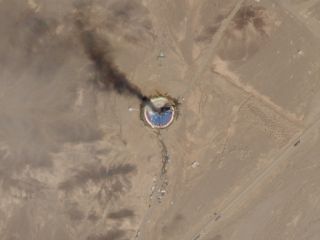 Earth-observing satellites will tag along on two upcoming launches for SpaceX's Starlink megaconstellation.

Six SkySat spacecraft operated by San Francisco-based company Planet will ride to low Earth orbit (LEO) atop SpaceX Falcon 9 rockets in the near future, representatives of both companies announced Wednesday (May 13).

The SkySats will fly as rideshare payloads on the two missions, whose primary purpose will be to loft more spacecraft for SpaceX's burgeoning Starlink internet-satellite constellation. Three SkySats will launch on the ninth Starlink mission, which is expected sometime in June. (Starlink No. 8 is scheduled to lift off this weekend, by the way.) The other three will go up later this summer, Planet representatives said.

Over the course of this spring and summer, we'll be launching six SkySats into space aboard @SpaceX's Falcon 9, offering targeted coverage, unrivaled rapid revisits and raw image capacity in key regions. https://t.co/yFu5tHNWbH pic.twitter.com/g4UsgtVwoUMay 13, 2020

The six Earth-observing satellites will join 15 other SkySats in LEO, but in different orbital patches. The SkySats already aloft are in sun-synchronous orbit, which affords them views of Earth's surface with consistent solar illumination.

"SkySats 16-21 will operate at a 'mid-inclination' orbit of 53 degrees, complementing the sun-synchronous fleet, and will offer more targeted coverage and raw image capacity in key geographic regions," Planet representatives wrote in a May 13 update.

Planet is best known for its big constellation of Dove cubesats, each of which is the size of a shoebox and weighs just 11 lbs. (5 kilograms). The little Doves are highly capable, featuring a resolution of about 10 feet (3 meters).

The SkySats are considerably bigger, weighing about 220 lbs. (100 kg) apiece, and sharper-eyed; they can pick out objects on the ground just 28.3 inches (72 cm) across. SkySats also have onboard propulsion systems, which Doves do not.

"In a single scene, a Dove can image an entire city," the company's website reads. "Simultaneously, SkySats can be tasked to focus on the areas of greatest interest."

Planet sells its Earth imagery to a variety of customers but tends to make the most important and impactful images available free of charge. For example, the company has released photos of natural disasters such as earthquakes and imagery showing the aftermath of Iranian missile attacks on Iraqi military bases.

SpaceX launches Starlink satellites in 60-satellite batches, seven of which have been lofted to date. But there will be many more such launches in the future; the company has permission to launch about 12,000 Starlink craft and has applied for approval for 30,000 more.