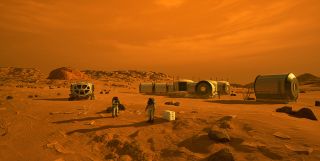 An artist's depiction of life on Mars.
(Image: © NASA)

Listen to would-be space explorers for long enough, and eventually they will likely argue that humans must develop outposts on other worlds in case of disaster here on Earth, as a so-called Planet B.

But that's a dangerous narrative, said Kathryn Denning, an anthropologist at York University in Canada who focuses on the intersection of space exploration, humanity and ethics. It's not particularly feasible, either, by her calculation.

"The reality is, what would be needed to create a sustainable human civilization in the solar system that could effectively be a backup for humanity?" Denning said to Space.com. "That, for every kind of foreseeable future for, say, the next hundred years, requires a functioning and sustainable civilization here."

Related: Before We Find Aliens, Humans Need to Figure Ourselves Out

That reliance on Earth is not surprising considering how many characteristics of other worlds make them inhospitable or even threatening to humans. But the tie to Earth does throw a wrench in dreams of shuffling off our terrestrial coil — dreams that can be an attractive alternative to the difficulty of tackling the challenges of life at home.

"For me, the question is balance," Denning said. "How can we be enthusiastic about the human capacity to explore while maintaining our focus on what needs to happen here on this planet?"

Some approaches developed to address challenges of spaceflight can also shape life on Earth; NASA regularly highlights "spinoff" technologies you don't need to go to orbit to appreciate. Other challenges and solutions of space lack those spinoff applications.

Sometimes, the idea of a fallback world is stretched even further beyond the bounds of possibility, to places we can't pragmatically visit. "Amazing scientific discoveries, for example, exoplanets, get co-opted into problematic stories about our own life here on Earth. Exoplanets do get framed as a Planet B," Denning said. "That's become the story, that that is why exoplanets are important, because maybe we can go there when we've destroyed Earth." That reasoning ignores the scientific importance of studying these distant alien planets.

Transferring humanity elsewhere also has consequences for destination worlds. Some of those concerns are addressed by planetary-protection guidelines, which are designed in part to reduce the odds that terrestrial contamination will prevent scientists from being able to determine whether life exists on other worlds.

Still, Denning said she's not convinced that those guidelines are enough to protect either other worlds and any life there or even astronauts themselves. "I'm not saying Mars off limits forever or anything like that," she said. "In my ideal universe, we would just be slowing down and taking more time and making sure that we get it right for everybody's sake, for the sake of any humans you're sending out there as well."

Those concerns apply to exploration on the scale of just a handful of astronauts as well as to the more sizable and permanent migration implied by the term Planet B. But in both cases, humans have a lot of potential to change the worlds they visit, purposefully or accidentally. And Denning said she wishes we would spend more time now discussing what those worlds' futures may someday look like.

"We've got worlds out there that we haven't really messed up yet," Denning said, wistfully pointing out that if we're careful, we can keep them that way. "Wouldn't it be nice?"