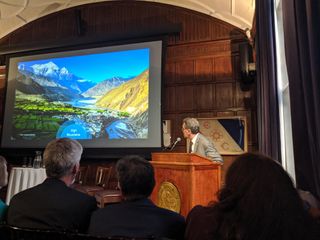 Ben Orlove, a professor of public policy at Columbia University and a lead author on the 2019 IPCC special report, explains the team's findings at the Explorer's Club on Sept. 25, 2019.
(Image: © Chelsea Gohd/Space.com)

Yesterday (Sept. 25), a stark new climate report came out that showed climate change is progressing much faster than anticipated, but it's not too late for humans to make changes.

The report, written and released by the United Nations-led Intergovernmental Panel on Climate Change (IPCC), and formally known as the IPCC Special Report on the Ocean and Cryosphere in a Changing Climate, details the most up-to-date understanding of climate change, its causes, how it will continue to impact us on Earth and what we can do about it. The report looks to 2100 to see both where we will be if we continue on as we currently are, or if major changes are made to mitigate contributing factors like carbon dioxide emissions.

The main takeaway from the report? "We're seeing that climate change impacts are already happening, were seeing that they're happening at a faster pace than before," Ben Orlove, a professor of public policy at Columbia University and a lead author on the report, said to Space.com at an Explorer's Club event in New York on Sept. 25, where scientists, including authors of the report, discussed the report and its implications.

This harsh reality is "true in the oceans, sea levels are rising, the oceans are turning more acid[ic], they're losing the oxygen that's required to support life. We're seeing glaciers melting on every continent of the world. Antarctica and Greenland [are] also losing their ice. These are serious problems," Orlove added. "We've been able to look ahead to 2100 and to distinguish what happens if we cut back on greenhouse gases soon or if we do not. And there's an enormous difference. It'd be much easier to cope with the changes that will come by 2100 if they're smaller."

"This report is built on the science we need to guide us in adapting to a changing environment and, most importantly, to avert a planetary disaster … The findings of the new IPCC report need to be known and not only known but understood by me and all of my colleagues in government and politics around the world," Katrín Jakobsdóttir, the prime minister of Iceland, said at the event.

The report was clear in showing how, if we continue behaving in a "business-as-usual" fashion, climate change and its consequences will continue to grow to unprecedented extremes. "The report does not prescribe telling anyone what to do. But we can show the consequences of those actions," Orlove said.

Tropical storms becoming both more severe and more frequent will be just one of many realities that we will face. It is apparent in the report that, seeing as we are already experiencing the consequences of climate change, there is no way to avoid its effects.

However, while this might seem like a "doomsday" report to some, the authors were surprisingly optimistic in showing that, while the details of progressing climate change are sobering, we can do something about it. In the report, there is a figure, pictured above, which shows graphs with a red line and a blue line.

The red line shows the progression of climate change if we don't change anything, and it goes sharply up in all cases (except for ocean acidification because in that graph the pH is dropping). But the blue line is where there is hope. This line, which doesn't increase sharply and instead looks almost straight, shows what will happen is we make major changes to human activity as it relates to climate change.

"You don't turn the ice sheets around in decades or even centuries. But you can see it's a much, much rosier picture with perhaps less than a meter of sea level rise even centuries out into the future, and that's something that I think we can all probably deal with and tolerate," Robert DeCanto, a lead author on the polar regions chapter of the report, said about the possibility to change our future with dramatic mitigation of human activity affecting climate change.

So, while this report is a sobering reminder that we are causing climate change, which will continue to threaten and take human lives around the world, the report's authors say we can do something about it.

"There are things that people can do in their homes, in their communities, in their countries and around the globe. At the personal level there are steps we can take to decarbonize our own personal lives. We can eat less meat, we can take public transportation. These are not choices that we're imposing," Orlove said. He explained that the report does not tell anyone what to do but, rather, outlines how policymakers and all of us at home have the power to affect our future in one way or another.

This report and climate research goes hand in hand with activities performed in space. While efforts to launch satellites, experiments and humans into space are often seen as separate from the issues we face on Earth, they are intrinsically linked.

"Space-based research is fundamental. In the high mountain chapter, were able to trace changes in glaciers because satellites can actually measure the weight of glaciers," Orlove said, referencing space-based research used for this special report. "The tiny variations in the Earth's gravitational field that are caused as water's transferred from glaciers to oceans, it can be registered by satellites," he added.

Aspects of climate change that might not seem as readily apparent are also observed and studied using space-based data. For example, animal herding in the mountains. "Indigenous communities high in the Andes and in the Himalayas have long traditions of herding animals. We're able to trace the changes in the pastures due to glacier retreat because the satellites offer us such precise images that we can observe the meadows as they shrink," Orlove said.

"We can see all of that from space! [It's] fundamental to support it [climate change research] and what a wonderful model of international cooperation," he added.