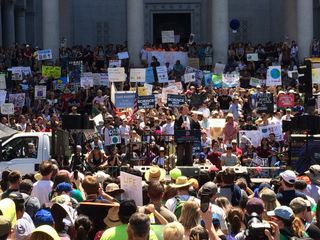 A crowd of demonstrators, gathered for the March for Science Los Angeles rally, listened to speakers in front of City Hall on April 22, 2017. On Sept. 20, 2019, demonstrators gathered once again for a global strike against climate change. For scientists, space is a great vantage point to study climate change from.
(Image: © Calla Cofield/Space.com)

Today (Sept. 20), students are leading a global strike to raise awareness of the climate crisis that we are in. Protests and demonstrations are drawing attention to the devastating consequences of climate change, which continues to worsen. Since the "Earthrise" photo of Apollo 8, the first photograph that was taken of Earth from space, space has served as a unique vantage point to show how precious our planet really is.

But space doesn't just allow us to appreciate the blue marble that we inhabit, it also allows scientists to better study our planet and understand climate change.

Today, scientific instruments on board a vast, diverse fleet of orbiting satellites continuously monitor our planet. Ever since the first weather-monitoring satellite launched into low Earth orbit in 1959, we have kept an eye on and analyzed our planet, its atmosphere and how the actions of our species have affected it.

In 1984, the Earth Radiation Budget Satellite provided critical observations that showed how, even 30-plus years ago, human activities like burning fossil fuel were affecting our planet. Observations made by this satellite even helped researchers to identify the hole in our ozone layer.

In 2014, NASA's Orbiting Carbon Observatory (OCO-2) delivered the first-ever global maps of carbon dioxide concentration. From 1959 to today, satellites from a number of space agencies — and now, even private corporations — image, monitor and analyze our planet.

In 2016, the ESA's Sentinel-3A satellite launched to collect data on ocean surface temperatures. These kinds of data show concretely that ocean levels are rising — and so are their temperatures.

Currently, NASA's Geostationary Operational Environmental Satellites (GOES) monitor the entire Western Hemisphere and track severe storms and emergency locator beacons on large vehicles. One of the consequences of climate change is the worsening of severe storms like hurricanes. By monitoring storms from space over time, scientists can track the frequency and severity of storms as climate change progresses.

These are just a few of the satellites that have, over the years, opened our eyes to exactly how climate change is progressing, and why, and what we can do about it. But satellites aren't the only vehicle for climate change research from space.

In 2011, the European Space Agency put out a Call for Ideas (CFI) for research projects in climate change studies that could take place aboard the International Space Station. The space station is home to a continuously rotating variety of experiments and, alongside satellites, some of these experiments have and will continue to study our Earth's climate.

Instruments used to study Earth and its climate have also been developed, tested or used on the station. For example, the JAXA Superconducting Submillimeter-Wave Limb-Emission Sounder (or SMILES instrument) was mounted on the external platform of the space station's Japanese Kibo module. The SMILES instrument measured trace amounts of gas in the stratosphere. Some of the gases studied with this instrument interact with Earth's ozone layer.

NASA's Hyperspectral Imager for the Coastal Ocean (HICO) was also mounted on this same module. This imaging spectrometer was built to monitor the coastal waters of Earth's oceans.

But, while scientists have developed and used innumerable satellites and space-based instruments to monitor Earth, its atmosphere, climate, weather patterns and more, space also offers is an incredible view of our planet.

Astronauts aboard the space station are able to see events like major hurricanes from high above the planet. So, while the instruments that orbit and study Earth collect important data, photos and videos taken by astronauts add to the vast wealth of information about our planet and its climate.