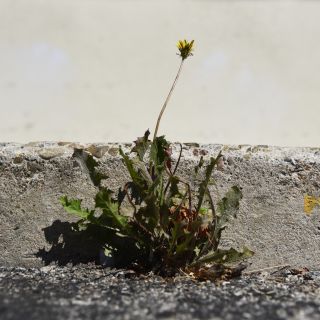 A pioneering plant scratches out a living on the streets of Holocene San Francisco.
(Image: © Jonathon Keats)

Terraforming Mars would be a big and complicated job, so maybe we should get a little practice here on Earth first.

Rewilding our planet — letting other life-forms take back some of the space humanity has gobbled up recently — could help us work out some of the ethical and procedural kinks involved in bending other worlds to our will, says conceptual artist Jonathon Keats.

"How do we terraform Mars? We can get ideas from re-terraforming Earth," he told Space.com.

Keats, who often tackles space-related themes in his art, leads a new initiative called Pioneers of the Greater Holocene, which kicks off tonight (Sept. 5) with an opening at Modernism Gallery in San Francisco. (The event is free and open to the public. You can learn more at Modernism's website.)

The project's main focus is reducing our species' impact on Earth. Keats has a specific goal in mind: staving off the Anthropocene, a coming geological epoch defined by the many marks humanity has left on its home planet.

The International Union of Geological Sciences appears poised to declare the advent of the Anthropocene, with the epoch's start likely pegged as the early 1950s, when thermonuclear bomb tests began spreading radionuclides around the globe. But Keats isn't giving up just yet on the Holocene, which began 11,700 years ago with the end of the last ice age.

"I'm not trying to bring back the Holocene; I'm trying to stay in the Holocene, and I think we all should be doing that," Keats said.

"I take the Anthropocene concept as a challenge," he added. "We need to acknowledge that we have caused enormous damage, and it will be visible for a long time to come."

The Pioneers is a grassroots attempt to minimize this damage. The initiative plans to catalog places in the San Francisco Bay Area still in the Holocene's grip, from coastal redwood forests to cracks in city sidewalks where hardy weeds have taken root. Such inventory work could help geologists make a more informed epochal decision, Keats said.

The group is planning more active measures as well. In San Francisco, for example, the Pioneers will hand out packets containing the seeds of native grasses, along with nutrient mixes designed to spur the growth of lichens, which are symbiotic pairings of fungal and photosynthetic partners.

Volunteers will spread these little life-forms far and wide, helping nature take back some more pieces of the city. The work of the lichens will have particular symbolic meaning, Keats said, demonstrating the power of cooperation.

He hopes such activities will inspire similar efforts around the world. Indeed, the long-term plan is to foster the growth of a global network of people and other organisms, whose Holocene-reviving work will be documented by a new Institute for the Greater Holocene. This institute will open in the fall of 2020 at a major state university, whose identity will soon be revealed, Keats said.

The top layers of Earth's crust already harbor evidence of humanity's considerable impact, from those bomb-blasted radionuclides to high concentrations of industrial fertilizers, toxins and other pollutants. But we still have a chance to cap that anthropic layer — to keep it thin enough that our descendants, or any alien geologists who happen to visit our planet in the future, don't judge us too harshly, Keats said.

"The layer that we lay down is the ultimate picture of ourselves," he said. "We can make the Anthropocene not an epoch or even an age, but a monument to a near-death experience that we overcame."

And who knows? Maybe a Holocene revival would usher in a shift in thinking that informs our eventual settlement of Mars. Perhaps when we colonize the Red Planet, we will do so not just as a single species spreading its own seed but as emissaries of an entire ecosystem, ambassadors rather than conquerors.