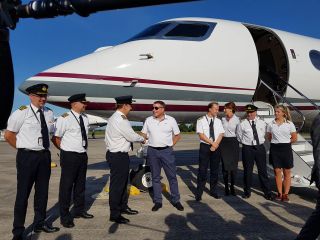 The One More Orbit crew back on the ground at NASA's Kennedy Space Center in Florida after their record-setting flight.
(Image: © One More Orbit)

Traveling in a Qatar Airways Gulfstream G650ER, the team traversed the globe at an average speed of 534.97 mph (860.95 km/h), setting a new world speed record. The previous record of 511 mph (822 km/h) was set in 2008. (Different polar-circumnavigation missions spend varying amounts of time on the ground, explaining why the total-time record and average-speed records weren't set on the same flight.)

Officials from the Fédération Aéronautique Internationale (World Air Sports Federation) and Guinness World Records were on-site at KSC Thursday to verify the records.

According to Virts and One More Orbit, the team unknowingly set a third record thanks to two of the eight passengers — film director Jannicke Mikkelsen and flight attendant Magdalena Starowicz, who became the first women to complete a polar circumnavigation of the world.

Following the historic flight, Space.com spoke with Virts about the mission.

The eight passengers boarded the Gulfstream G650ER Tuesday morning (July 9) and prepared to take off. The crew and cargo had been carefully weighed as each ounce of fuel was meticulously calculated and accounted for.

Led by Action Aviation Chairman Hamish Harding, the crew took off at 9:32 a.m. (1332 GMT) Tuesday, bound for the North Pole. Less than 48 hours later, they touched back down on the same Florida runway.

Virts described the flight as "long but fast." He explained that the total flight time was just under 48 hours, which sounds like a long time, but in reality, it went by very quickly.

"It was a very busy, very intense 48 hours," he told Space.com. "But I wouldn't trade it for anything."

To complete their quest of breaking world records, the aviators chose a Gulfstream G650ER aircraft, which is known for its performance. "G650 is one of the fastest civilian aircraft," Virts said. "It can go Mach 0.925 [92.5% the speed of sound] and travel up to 7,500 miles [12,070 km] before refueling, so it was the perfect choice."

The craft made three planned pit stops for fuel along the way: one each in Kazakhstan, Mauritius and Chile. Along the way, the team picked up a special passenger: Virts' former space station crewmate, Russian cosmonaut Gennady Padalka.

Padalka, the world's current record holder for total days spent in space (879), temporarily joined the crew in Kazakhstan. (He then got off in Mauritius because of fuel restrictions.)

The One More Orbit mission was conceived by Harding as a way to honor the 50th anniversary of the Apollo 11 moon landing.

"Our mission pays homage to the Apollo 11 moon landing, by highlighting how humans push the boundaries of aeronautics," Harding said in a statement. "It is our way of paying tribute to the past, the present and the future of space exploration."

Virts said Harding approached him several years ago to take on the project, and they even hoped to have one or two Apollo astronauts as part of the crew. The project went through multiple iterations over several years, but with the 50th anniversary approaching, Harding and Virts decided to just go for it.

As a way to help inspire future generations, Harding asked Virts if he wanted to make a movie about the mission. So Virts stepped out of the pilot's seat and went behind the camera.

He was one of several astronauts who had been specially trained by cinematographer James Neihouse to capture footage during his time on the space station. This imagery would be used not only for archival purposes but also for documentaries, such as the IMAX film "A Beautiful Planet."

Virts said this commitment to photography was one of the most important aspects of his time in space, because so many people will see the imagery and be inspired by it. He hopes his upcoming documentary will have a similar effect.

Like many others in the astronaut corps, Virts said the Apollo program inspired him to be not only a pilot but also an astronaut. "I'm really excited about the anniversary, and I can't wait to see what the future holds," he said. "I'm friends with a lot of the Apollo guys and even got a well-wish from Charlie Duke."

Virts spent more than 200 days in space during his astronaut career, but there's one thing he didn't get a good look at from his orbital perch: the poles. He said that, even after being in space, flying over the planet's polar regions was an awe-inspiring experience.

"The ice was really beautiful," Virts told Space.com. "I've never seen anything like that before."

He added that the polar ice was not the solid sheet he expected to see but rather was scarred with cracks that stretched for hundreds of miles. "I assumed it would be solid," he said. "But there were lots of cracks in the ice and a big, open ocean up there."

For the most part, the flight went smoothly, but there was a bit of drama over Antarctica when air temperatures suddenly plummeted to minus 117 degrees Fahrenheit (minus 83 degrees Celsius). The freezing temperatures were too much for the Gulfstream, so the plane had to fly at lower altitudes for a while, thus lengthening the flight time.

But that didn't stop the crew from achieving their goals and setting new world records.

Now that Virts is back on the ground, he plans to edit the mission footage. He's also looking forward to throwing out the first pitch at Dodger Stadium on July 20 in honor of the Apollo anniversary.