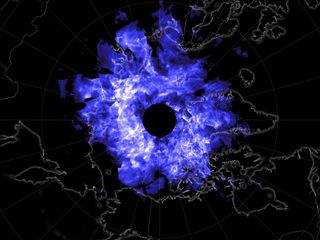 Data gathered by NASA's Aeronomy of Ice in the Mesosphere (AIM) spacecraft makes up this image of noctilucent clouds seen on June 12, 2019.
(Image: © NASA/University of Colorado Boulder/Joshua Stevens)

An eerie image of Earth's North Pole shows the effects on our planet's reflectivity when an unusual type of cloud forms.

The image, which is based on data acquired on June 12, shows noctilucent clouds, which are clouds that appear in twilight during the hour after the sun has set. These are extremely high-atmosphere clouds that continue to reflect light even once the sun is below the horizon for observers on the ground.

These clouds most commonly form at high latitudes, between 50 degrees and 65 degrees north. The new image (obtained over several satellite passes) shows reflectivity measurements gathered by NASA's Aeronomy of Ice in the Mesosphere (AIM) mission, as light from the clouds bounces back into space.

Related: Watch the Clouds on Mars Glide By in This Curiosity Rover Video

"As Earth's lower atmosphere warms with spring and summer, the upper atmosphere grows cooler," NASA said in a statement. "In the process, ice crystals collect on meteor dust and other particles, creating electric blue wisps on the edge of space — usually 80 to 85 kilometers (50 to 53 miles) in altitude. In the AIM map, noctilucent clouds appear in various shades of light blue to white, depending on the density of the ice particles."

The season for noctilucent clouds usually starts in late May and finishes in August. Skywatchers observed outbreaks of this type of cloud in the middle latitudes of North America and Europe in June. The website Spaceweather.com also reported such clouds visible as far south as the Southern California desert, Oklahoma and New Mexico on June 8 and 9, NASA said.

Since its launch in 2007, AIM has gradually been seeing more lower-latitude noctilucent clouds. The higher tallies are likely in part due to an increase in water vapor in the atmosphere caused by climate change, NASA added.

But there's a natural cycle at play as well, according to NASA. Right now, the sun is near the low point of its 11-year activity cycle. A quiet sun produces less of the ultraviolet radiation that destroys high-altitude water molecules.

Noctilucent clouds are not unique to Earth. Just last month on Mars, the Curiosity rover observed a similar phenomenon over its home base in Gale Crater, near the Martian equator, NASA said.