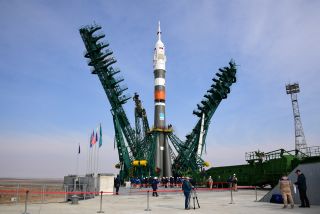 A Russian Soyuz 2.1a rocket carrying the Soyuz MS-16 spacecraft stands atop the launchpad at Baikonur Cosmodrome, Kazakhstan to launch three new crewmembers to the International Space Station on April 9, 2020.
(Image: © RSC Energia )

NASA has struck a deal with its Russian counterpart, Roscosmos, to buy a seat on a Soyuz crew launch this fall, bumping a cosmonaut from that flight in return for $90 million and a bit of cargo on a U.S.-built spacecraft..

The agreement, which NASA announced yesterday (May 12), comes just as the space agency prepares to launch two astronauts on a U.S. rocket for the first time since 2011, when the space shuttles retired. On May 27, Bob Behnken and Doug Hurley will step aboard a SpaceX Crew Dragon capsule for a test flight to the International Space Station. But that flight has been a long time coming: NASA signed contracts with SpaceX and a second company, Boeing, in 2014. And as the companies have designed, built and tested their vehicles, NASA has paid Roscosmos to ferry astronauts to the orbiting laboratory — this fall for the last time, the agency hopes.

"NASA has high confidence that U.S. commercial crew providers will be available in 2020/2021 and that no further Soyuz seat purchases will be necessary," NASA spokesperson Stephanie Schierholz told Space.com in an email. "This modification to the Roscosmos contract is to ensure continued U.S. presence aboard the space station as we transition to sustained commercial crew transportation operations."

Related: In photos: Expedition 62 on the International Space Station

NASA has not yet announced who will fly in the newly purchased seat, but they will join two Russian cosmonauts in relieving the current space station crew of their responsibilities. The station's current Expedition 63 crew is also composed of one NASA astronaut, Chris Cassidy, and two Russian cosmonauts, Anatoly Ivanishin and Ivan Vagner.

Before the deal was negotiated, Russia had planned to fly three cosmonauts on the fall launch to support the upcoming launch and docking of a new Russian Multipurpose Laboratory Module, called Nauka, to the orbiting laboratory, NASA officials said.

To compensate for that missed opportunity, in addition to the $90,252,905.69 payment, Schierholz told Space.com. NASA has also agreed to ship about 1,800 lbs. (800 kilograms) of Russian cargo to the orbiting laboratory on U.S. cargo ships over the course of the next 2.5 years.

Once the commercial crew program is fully operational, NASA plans to continue launching astronauts on occasional Soyuz spacecraft. However, rather than pay for the privilege, the agency intends to trade, passing along to Roscosmos seats on SpaceX and Boeing flights. Cosmonauts are not yet booked on any such flight, but SpaceX's first operational crew mission will carry three NASA crewmembers and one Japanese astronaut.