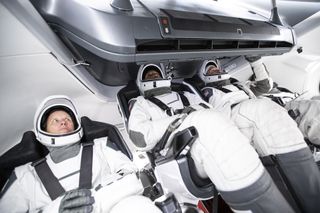 SpaceX's first crewed mission is just the beginning, and the company is already gearing up for what comes next.

The flight, called Demo-2, will be SpaceX's first-ever crewed mission, and the first orbital human spaceflight to depart from U.S. soil since NASA's space shuttle fleet was grounded in July 2011. But Demo-2 is far from a climax; as its name suggests, it's a demonstration mission, a test designed to show that the Falcon 9 and Crew Dragon are ready to begin operational astronaut-toting flights.

Once Demo-2 is complete, and the SpaceX and NASA teams have reviewed all the data for certification, SpaceX will launch Crew Dragon’s first six-month operational mission (Crew-1) later this year. The Crew-1 spacecraft is in production and astronaut training is well underway pic.twitter.com/SVMQMkK6ABMay 1, 2020

SpaceX is committed to fly six operational crewed missions, under a $2.6 billion deal the company signed with NASA in 2014. And the wheels are already turning on the first of them, known as Crew-1, which will send NASA astronauts Michael Hopkins, Victor Glover and Shannon Walker and Japan's Soichi Noguchi to the ISS for a six-month stay.

On April 24, for example, SpaceX put the Crew-1 Falcon 9 through its paces, performing "static fire" tests on both of the rocket's stages at the company's facility in McGregor, Texas. During static fires, rocket engines light up briefly while the vehicle is secured to the ground. (The Falcon 9 first stage is powered by nine Merlin engines; the upper stage sports a single Merlin.)

The team at SpaceX’s rocket development facility in McGregor, Texas completed a static fire test today of the Falcon 9 first stage that will launch Crew Dragon’s first operational mission (Crew-1) with 3 @NASA astronauts and 1 @jaxa_en astronaut on board later this year pic.twitter.com/iagTmZUXDuApril 24, 2020

And Crew-1 astronaut training is already "well underway," SpaceX representatives said via Twitter on May 1. That tweet included photos of the suited-up crewmembers, presumably at the company's headquarters in Southern California, where the Crew-1 capsule resides — for now.

"We should be shipping that vehicle [to Florida] in the next few months and prepping for the first operational mission," SpaceX president and chief operating officer Gwynne Shotwell said during a Demo-2 news conference on May 1.

SpaceX plans to get Crew-1 off the ground sometime this year, but a specific timeline has not yet been announced. That won't happen until Demo-2 is in the books and SpaceX and NASA teams have had a chance to assess the test flight and its reams of data.

And we don't know when such an assessment can begin, because it's unclear at the moment when Demo-2 will come back to Earth. That decision won't be made until after launch, NASA officials said.

"When we get on orbit, we'll again look at the vehicle systems and how it's performing, how Dragon's doing," Steve Stich, deputy manager of NASA's Commercial Crew Program, said during a different Demo-2 briefing on May 1. "We'll be looking also at the readiness for the Crew-1 mission later this year, and then at a time during the mission, we'll decide exactly how long we'll fly the mission."

The minimum Demo-2 length is about a month and the maximum is around 119 days, Stich added. That upper limit is imposed by solar-array degradation, which is caused by atomic oxygen in low Earth orbit, he said. (The operational version of Crew Dragon, such as the capsule that will fly Crew-1, is designed to last 210 days in space, SpaceX representatives have said.)

The McGregor team also completed a static fire test earlier this week of Falcon 9’s second stage engine for the Crew-1 mission, which will propel Crew Dragon toward the @space_station once the first stage separates and reorients to land back on Earth pic.twitter.com/QYaMgLQeLgApril 24, 2020

Demo-2 will be the second visit to the ISS for a Crew Dragon. One of the capsules aced an uncrewed mission to the orbiting lab called (you guessed it) Demo-1 in March 2019. And SpaceX routinely flies robotic resupply missions to the ISS for NASA with a cargo version of Dragon, under a different contract with the space agency.

Aerospace giant Boeing is preparing to launch NASA astronauts as well, under its own Commercial Crew contract. But Boeing isn't quite ready for its first crewed flight.

During the company's version of Demo-1, which launched this past December, Boeing's CST-100 Starliner capsule suffered several software issues, including a glitch that caused the craft to get stuck in the wrong orbit for an ISS rendezvous. Starliner will refly the uncrewed ISS mission before taking astronauts aboard, Boeing representatives announced last month.