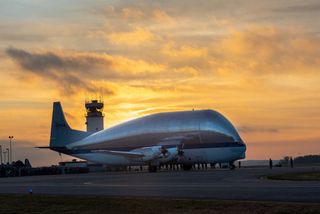 NASA's Super Guppy transport plane, with the Orion crew capsule inside, on the ground at Mansfield Lahm Airport in Ohio on Nov. 24, 2019. Orion will undergo a series of tests at NASA’s Plum Brook Station.
(Image: © NASA/Bridget Caswell)

NASA's Orion spacecraft just took a ride on one of the weirdest airplanes in the world.

Orion, which will help astronauts get to and from the moon and Mars, flew from Florida's Kennedy Space Center (KSC) to Ohio over the weekend aboard the Super Guppy, NASA's specialized oversized-transport plane.

The Super Guppy touched down at Mansfield Lahm Airport on Sunday (Nov. 24). Orion was removed from the plane and loaded onto a flatbed truck on Monday morning (Nov. 25), NASA officials said. The capsule is headed for NASA's Plum Brook Station, where it will undergo extensive testing inside the world's largest vacuum chamber.

The testing campaign will begin with a "thermal test," during which Orion's various systems will be powered on in a space-like environment.

"During this phase, the spacecraft will be subjected to extreme temperatures, ranging from minus 250 to 300 degrees Fahrenheit [minus 160 to 150 degrees Celsius], to replicate flying in and out of sunlight and shadow in space," NASA officials wrote in a statement. "The second phase is an electromagnetic interference and compatibility test, lasting about 14 days. This testing will ensure the spacecraft’s electronics work properly when operated at the same time."

After these tests are done, Orion will be ferried back to KSC, where technicians will begin integrating it with NASA's huge Space Launch System (SLS) rocket ahead of the Artemis 1 mission.

Artemis 1, which is targeted for November 2020, will send Orion on a three-week, uncrewed flight around the moon. That mission will be the first for the SLS and the second for Orion, which took a brief uncrewed jaunt to Earth orbit in December 2014. (That flight lifted off atop a United Launch Alliance Delta IV Heavy rocket.)

Artemis 1 will be a key milestone in NASA's Artemis program, which aims to put two astronauts down near the lunar south pole by 2024 and establish a long-term, sustainable human presence on and around the moon by 2028.

Accomplishing such goals will help NASA and its partners learn the skills needed to put boots on Mars, agency officials have said.

The Super Guppy has been hauling oversized NASA cargo for more than five decades. The plane's strange, bulbous shape makes perfect sense, given this role.

"Although there are other aircraft capable of carrying more weight than the Super Guppy, very few come close to its internal dimensions. Boasting an immense cargo area that is 25 feet in diameter and 111 feet long [7.6 by 34 meters], the Super Guppy can carry items that are virtually impossible to fit inside other cargo aircraft," NASA officials wrote in a description of the aircraft.

"The Super Guppy has a unique hinged nose that opens 110 degrees, permitting full frontal cargo loading," they added. "A control lock and disconnect system at the fuselage break allows the nose to be opened and closed without disrupting the flight or engine control rigging."