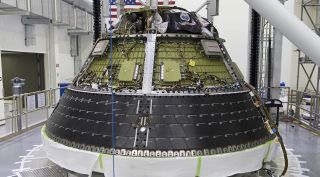 KENNEDY SPACE CENTER, Fla. — With a successful test of the spacecraft's abort system now complete, the manager of NASA's Orion program is optimistic the spacecraft will be ready to send humans to the moon in 2024 even as development schedules continue to slip.

The Ascent Abort-2 test, carried out July 2 from Launch Complex 46 at Cape Canaveral Air Force Station, demonstrated that Orion's launch abort system could safely pull the spacecraft away from a malfunctioning rocket in flight.

The test was one of the last major milestones for the spacecraft prior to the first Space Launch System mission, Artemis-1, carrying an uncrewed Orion on a test flight in cislunar space. "The next big checkmark is the moon. It's our Artemis-1 mission," said Mark Kirasich, NASA Orion program manager, at a post-test briefing here. He said that mission will take place "a little over a year from now," although there is skepticism in the space community that the mission can launch before the end of 2020.

That will be followed by the first crewed Orion mission, Artemis-2, expected no earlier than 2022. The following mission, Artemis-3, is the one expected to carry astronauts to a lunar Gateway, from which they will board a lunar module to land on the moon. The Trump administration set a goal in March of carrying out that landing by 2024.

"It was just this March, three months ago, that our mission became more exciting," Kirasich said at a pre-test briefing July 1. "We were extremely excited about the announcement. You might imagine that we have a very focused team. It elevated our focus."

Hardware for those next three Orion missions are in various phases of development, he said. Both the crew module and service module for the Artemis-1 Orion spacecraft are at KSC for testing, and Kirasich said after the briefing that he expected the two modules to be mated together around July 20 or 21.

Once mated, the Artemis-1 Orion will undergo a couple months of what he called "really detailed checkouts" at KSC. It will then be flown to NASA's Plum Brook Station in Ohio for tests in a thermal vacuum chamber there, including a stress test on the spacecraft by cycling between hot and cold conditions. The Orion will then return to KSC in early January for launch preparations

That schedule is slightly later than what agency officials said a little more than a month ago. In a May 28 briefing at a meeting of the NASA Advisory Council's human exploration and operations committee, Bill Hill, deputy associate administrator for exploration systems development, said he expected the crew and service modules to be mated by the end of June and return from Plum Brook in November. However, he acknowledged that the schedule was "trending a little bit down" because of an issue with a propellant control system.

He noted that development of the Artemis-1 Orion is going faster than for the one built for the Exploration Flight Test 1 mission in 2014, with Artemis-2 also going slightly faster than Artemis-1. "The Europeans are seeing the same thing with the service module," he said. "Their second build is going much better, much faster."

NASA has also started to purchase long-lead items for the Artemis-3 mission, which won't launch until 2024. Kirasich said those items include aluminum panels for the spacecraft being sent to aerospace machining shops, which will perform high-precision machining to reduce their mass. Another long-lead item is radiation-hardened electronics for spacecraft avionics systems.

Orion is only one part of NASA's architecture for returning humans to the surface of the moon, and not necessarily on the critical path. SLS has suffered extensive development delays, and the agency is only beginning the process of procuring landers, or lunar landing services, for taking astronauts to and from the lunar surface. Kirasich, though, believed Orion would be ready to play its part in that effort.

"We are really excited about this mission, and Orion is on track to support the administration's challenge," he said of the 2024 lunar landing goal.