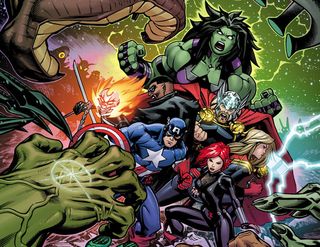 The Avengers have a date with adventure in the final frontier.
(Image: © Ed McGuinness/Val Staples (Marvel Comics))

Beginning this November, Marvel Comics' "Avengers" title will be heading into outer space to visit a galaxy that doubles as a space prison. Writer Jason Aaron reunites with returning series artist Ed McGuinness for a story which spells out what's coming — "Starbrand Reborn."

"As previewed in last year's Free Comic Book Day release, the Avengers will be venturing out into space, into a quarantined galaxy that houses the most dangerous criminals and creatures in the cosmos!" Marvel Executive Editor Tom Brevoort tells Newsarama. "The reason? A signal has been detected that a new Starbrand has been activated!"

"Why would an Earth defense system activate way out in space, and who has accessed this dread cosmic power? That's what the Avengers need to find out — and find out they will!"

The cover to the issue shows multiple hands bearing the Starbrand symbol - and also the return of Black Widow to the book, after over a year away from the team following Aaron and McGuinness' 2018 relauch.

The "Starbrand Reborn" arc of Avengers will also lay the groundwork for a larger storyline coming in 2020.

Here is the solicitation for November's Avengers #27 - look for Marvel's full November 2019 solicitations later this month.

Starbrand Reborn Part One: Riot in the Space Prison

Artist Ed McGuinness returns for an epic space adventure that takes the Avengers into an alien prison the size of a galaxy, where a mysterious new wielder of the all-powerful Starbrand has suddenly appeared, unleashing cosmic chaos. Good thing the Avengers brought along their newest member, the Black Widow.